The recent history of the coffins of Pakepu

The story of the discovery of Pakepu’s coffins has become confused over time. We know Prince Edward (later Edward VII) gifted the coffins to the Museum in 1869 following a visit to Luxor (ancient Thebes) in Egypt, but different travellers’ accounts has made piecing together the finer details problematic.

The most notable sources for the Prince’s travels in Egypt and his involvement in excavations, mummies and coffins are the journals of Mrs William Grey (Journal of a Visit to Egypt, Constantinople, the Crimea, Greece, &c. in the Suite of the Prince and Princess of Wales, 1869-1870) and William H. Russell (A Diary in the East during the Tour of the Prince and Princess of Wales) and the transactions of a lecture delivered to the Royal Society of Literature in London, 1870 by Samuel Birch, Keeper of Egyptian Antiquities at the British Museum. References to coffins are also made in newspaper clippings of the time and archives, including purchase receipts, held by the Royal Collection in London.

American Egyptologist Cynthia Sheikholeslami has conducted the most extensive research into the provenance of Pakepu’s coffins to date. We know they were gifted to the Museum by Edward, Prince of Wales (later Edward VII) in 1869 following a grand tour of the eastern Mediterranean with his wife, Princess Alexandra. This tour included a visit to Egypt as documented in the journal of Mrs Grey, an attendant to the Princess, and William H. Russell, a journalist for The Times newspaper.

Mrs Grey’s journal provides a personal account of the party’s day-to-day travels, including visits to archaeological sites, local antiquities dealers and excavations being undertaken on behalf of the Prince on the West Bank of the Nile at Luxor (ancient Thebes). While Mrs Grey mentions seeing curiosities, including mummies and coffins several times throughout her journal (dated between 23 February and 10 March, 1869), it is unclear at which precise point Pakepu’s coffins were found. The most explicit reference made to coffins was during the party’s second trip to Luxor on March 10, 1869 where Mrs Grey says: “…We all proceeded, about eleven o’clock, to Mustapha Aga’s [local antiquities dealer and British and American Consul], to see the famous Egyptian dancing-girls. When we first arrived, we were shown several very handsome mummy cases, which had been found in making the excavations for the Prince. As many as thirty-two have been dug out…The cases were quite well preserved, and the paint seemed as fresh as possible. The lids were taken off two, and inside was another case, still more decorated with gilding and painting, the figure and head of the dead person being supposed to be carved upon the lid. This inner case was also opened, and there was the corpse, wrapped up in linen, and strapped up with wide tape. The shape of the body was still perfectly seen and perfectly preserved…The Prince will bring a few of these cases with him to England”. While it cannot be proven with absolute certainty if Pakepu’s coffins belonged to this group, it does show that the party was not present at the excavations at the time of these coffins’ discovery.

The travel journal of William H. Russell provides a slightly alternative account of events. He says that on 10 March “thirty mummies, twenty of which are in excellent preservation, have been dug out by Colonel Stanton’s exploring party in the Prince’s reserves”. A receipt in the Royal Collection in London recording payment made by Prince Edward to Colonel Stanton for ‘Egyptian mummies’ at the sum of 83 7/8 pounds may have been for this excavation.

Russell also offers a provenance for the mummies. On 11 March he states, “The place in which the mummies were disinterred is a quarter of a mile from the Temple of Memnon [the Ramesseum]. The hole is dug down 100 feet deep…” He proceeds to discuss the discovery of a large red granite sarcophagus belonging to Queen Nitocris, implying that the mummies (and coffins) were discovered in the same burial shaft as the sarcophagus, although this would seem problematic in regard to their dating.

At the end of Birch’s paper he lists 28 coffins and mummies and the place of their distribution. “…The Prince presented the best examples to the British Museum, Oxford, Cambridge, Edinburgh, Dublin and other institutions. A few were given to some personal friends who accompanied him on his visit to the Nile”. According to Sheikholeslami, only 17 of these coffin sets can be identified in English collections today (these are mentioned in Porter & Moss), while the mummies, which accompanied them, are less easy to identify. Unfortunately, no record of the mummy housed in Pakepu’s coffins can be traced in the Museum’s records today. 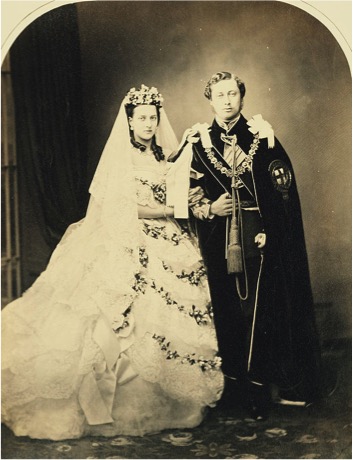 Photograph of the Prince of Wales with his wife, Princess Alexandra, in 1863.