How were the coffins of Pakepu decorated

There are two main components in the decoration of Pakepu’s coffins. This includes:

Using microscopic examination and a range of imaging techniques, in combination with a suite of instrumental analytical methods, it was possible to reconstruct the order in which the surfaces of Pakepu’s coffins were prepared and decorated.

On Pakepu’s inner coffin, the painted decoration was applied over an unusual, complex layered structure (on the exterior only) comprising a thick layer of fibrous glue, a layer of linen then non-fibrous glue followed by a layer of white calcite paste, a further layer of linen, and then two more white paste layers. There is also an enigmatic black patchy layer visible immediately over the fibrous glue in some places. This structure, which somewhat resembles the material known as cartonnage, masks the wooden carcass that it encases (you can see a clearer visual diagram of these structural layers here).

The surface layer on the intermediate coffin is quite different. Over the wooden support and partial pink paste layer, there is just one preparation layer of white calcite paste onto which the decorative scheme is painted.

Common to both coffins is a thinly applied painted decoration with the pigments probably mixed with a binding medium such as gum Arabic, which gives a watercolour-like appearance. The decoration is simple and sparse with the under-drawings, where present, executed in carbon-based black paint with a straight edge used to make marking out lines.

The figures on the coffins have been crudely painted with rapid, clumsy brushstrokes using a very limited palette of pigments: red earth, Egyptian blue, copper-based green and two different yellows (orpiment and yellow earth). White areas are made simply by leaving the calcite preparation layer exposed.

The motion of the paintbrush is visible on the coffins, showing the beginning and end of the brushstrokes, and often helping indicate where the artist was positioned whilst he worked. Streaks in some of the drawing lines that coincide with the paint brushstrokes indicate that some of the colours were applied to the coffins while the drawing was still wet. Drips in the thick blue paint on the intermediate coffin lid suggest it was painted whilst standing on its rim. The orientation of the box, however, was changed several times as the artist tackled the decoration of the interior (as you can see here and here).

While the lid and box of the intermediate coffin were painted separately before closing, the inner coffin was clearly decorated after it was closed with the body inside. This is apparent owing to the decoration, which runs over the join between the lid and the box and was cut when the coffin was opened. No varnish has been applied to either exterior surfaces of the coffins. 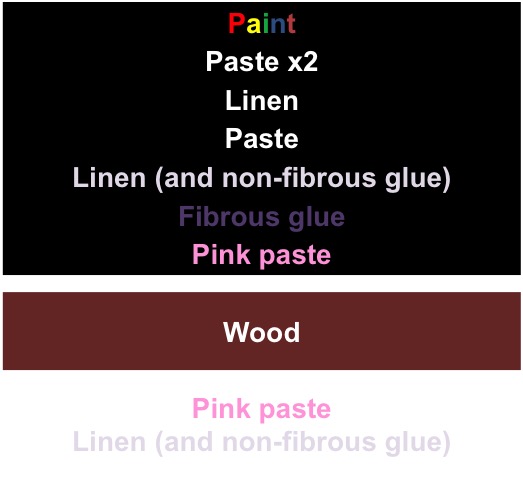 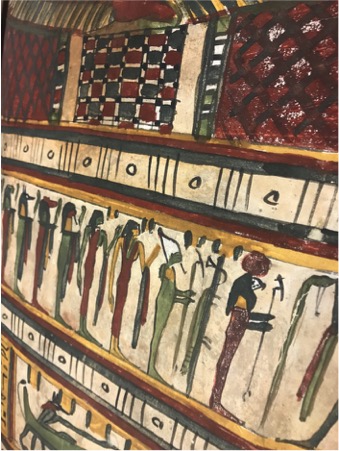 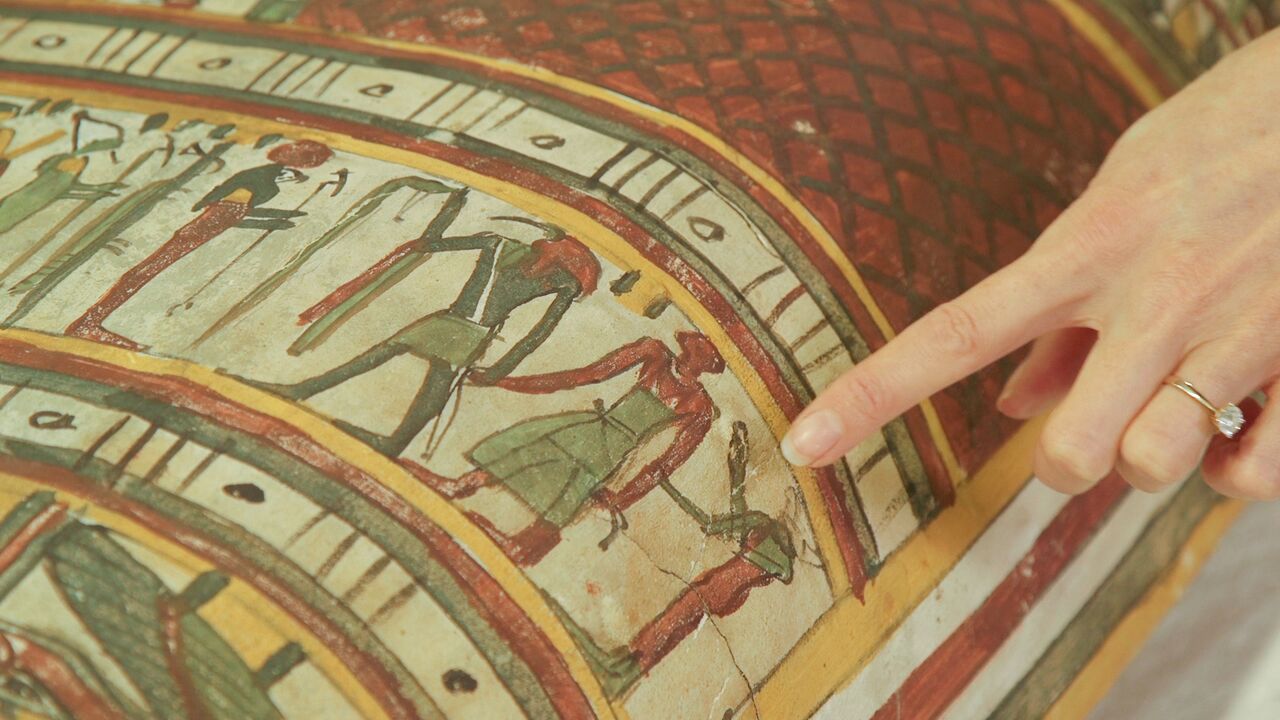 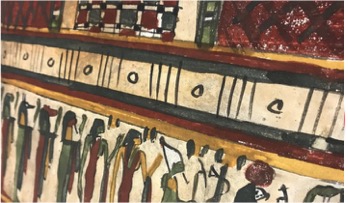 Detail showing the beginning and end of the brushstrokes on Pakepu's inner coffin. 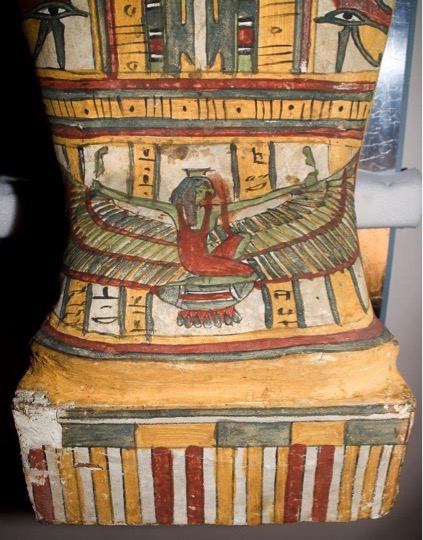 Smeared drips of red paint from the kneeling figures of Isis on Pakepu's inner coffin lid. 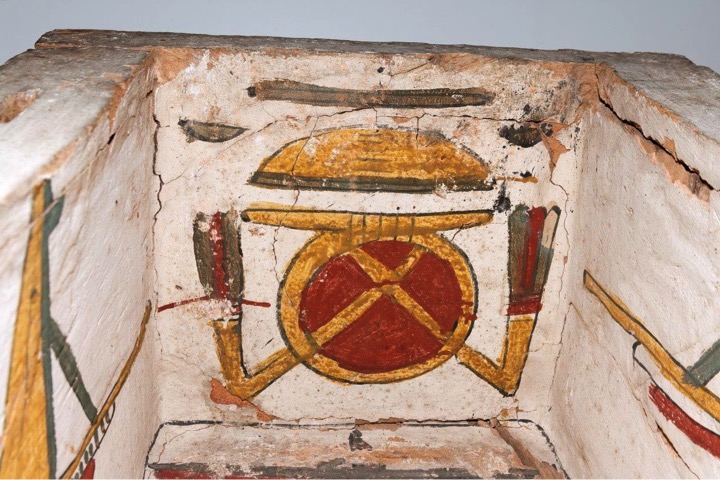 The interior of Pakepu's inner coffin box showing drips of red paint indicating the box was painted on its side. 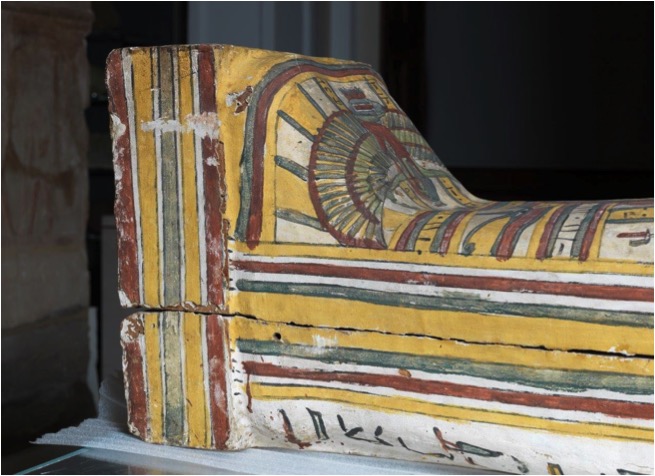 Painted decoration on Pakepu's inner coffin showing the overlaps between the lid and box.