How were the coffins of Pakepu constructed?

Advanced imaging techniques, such as CT-scanning and X-radiography, reveal some notable differences in the construction of Pakepu’s inner and intermediate coffins. While the inner coffin has been very well made from relatively few, large pieces of wood with tight joins between them, the intermediate coffin consists of many pieces, some very small, which are generally ill-fitting.

Pakepu’s inner and intermediate coffins nest inside each other. They were most probably originally placed inside a qersu coffin (an outer coffin with a vaulted roof resembling the form of the hieroglyphic sign for ‘coffin’, Gardiner’s Q6). Both coffins comprise a lid and box and were made from sycomore fig (Ficus sycomorus), a species of fig native to Egypt and commonly used in coffin production. Sycomore fig was also used for the rim tenons and for most of the dowels that hold the wooden construction together, although a few dowels of sidr (Ziziphus spina-christi) and acacia (Acacia sp.) were also identified.

The baseboard of Pakepu’s inner coffin box is formed from three large boards and three full-length planks make up the foundation boards of the lid. Much of the wood is ‘new’ (i.e. purpose- fashioned for this coffin only), except for a few areas, which show signs of earlier use. These are sections of the side panels of the box and the rim panels of the lid. Re-used wood can be identified by, for example, the presence of redundant joints, which have been filled in with smaller pieces of wood or paste and empty dowel holes or cut-off dowels, which are now useless; and cuts in the wood, which would have belonged to an earlier join.

The surface features of both coffins, such as the face, top and sides of the wig and wig lappets and the wooden ears were made separately and are held in place to the foundation boards using perpendicular and angled dowels.

Woodworking on the inner coffin indicates that the box and lid were most probably assembled individually, each from roughly shaped pieces of timber and then pinned together through the rims so that the final shaping of the coffin exterior would give the effect of a single, seamless object (a bivalve coffin). This effect was then reinforced by the application of the coffin’s decorative layers, which extend over the lid and box crossing the junction between the two.

In contrast to the inner coffin, the intermediate coffin box and lid are definitely made as two separate elements in both construction and decoration. Together they consist of at least 74 pieces of wood and 143 dowels with a large quantity of coarse pink paste (calcite, quartz and earth pigments) pushed into gaps and between the joints and also used to build up the form, especially the face. X-radiographs show that this wood was already damaged by insects before the coffin was made.

Most of the rim has thin planks added to raise the box to the desired height, and possibly to provide a better structure into which to cut the rim mortises. These mortises held the sycomore fig tenons that locked the box to the lid. 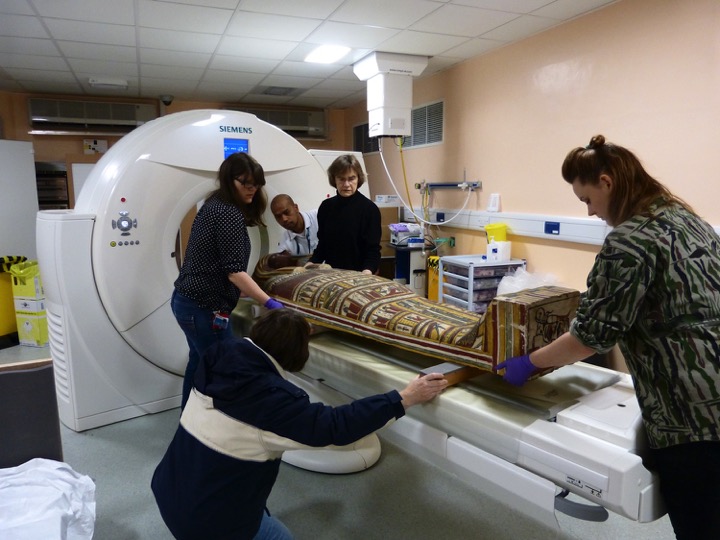 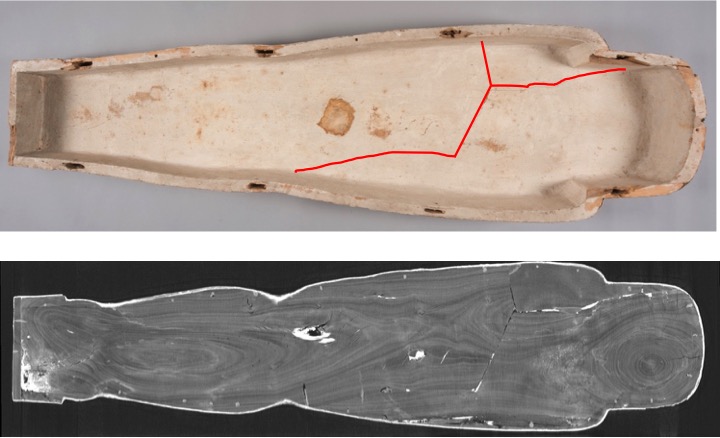 The baseboard of Pakepu's inner coffin box which is made from three large boards.