This morning, we were able to undertake new CT scanning of part of the coffin set of Nespawershefyt. Although we have X-radiographed the mummy board in the past, its construction was not absolutely clear. Colleagues at Addenbrooke’s Hospital (part of Cambridge University Hospitals) generously offered to CT scan it out of hours, on a Sunday morning when the scanner would not normally be in use. We were very conscious that the scanner might be needed if there was a call for an emergency CT scan to be carried out, in which case we would have immediately got out of the way to allow that to happen. Happily nothing like that occurred. We were joined by our brilliant CT scanning advisor and friend Tom Turmezei, Consultant Radiologist at Norfolk and Norwich University Hospital.

At Addenbrooke’s, we were met by CT radiographer Lauren England who carried out the scanning using a relatively new Siemens scanner. This seemed to be really speedy at scanning, and the results that appeared immediately on the computer screen looked amazingly detailed. In particular, the scans seemed to show some interesting carpentry in the area of the face that had not been visible at all on the earlier X-radiographs. We are excited to see what detailed examination of the scans will show up about how this part of the mummy board was put together. Something else we discovered (not about the mummy board) was that the sheets we had initially put underneath to support it appeared to be very similar in density to the wood, and this was likely to make the analysis of the scans a bit awkward. So we replaced them with pillows, and the problem disappeared – a useful lesson learned!

At the same time, we took another part of a coffin to be scanned: the head end from a yellow coffin, which is of a similar date. We have not yet explored this object in a lot of detail. Again, the immediate results from the scans were really promising as we could see how the wood had been worked to create the shape of the head end, and the way the holes for dowels had been angled.

We are hugely grateful to Tom and Lauren for giving up their Sunday mornings for this scanning, and to Rob Mackenzie, CT Scanning Manager at Addenbrooke’s for facilitating the visit today. The Fitzwilliam team consisted of Flavia Ravaioli, Julie Dawson and Helen Strudwick. 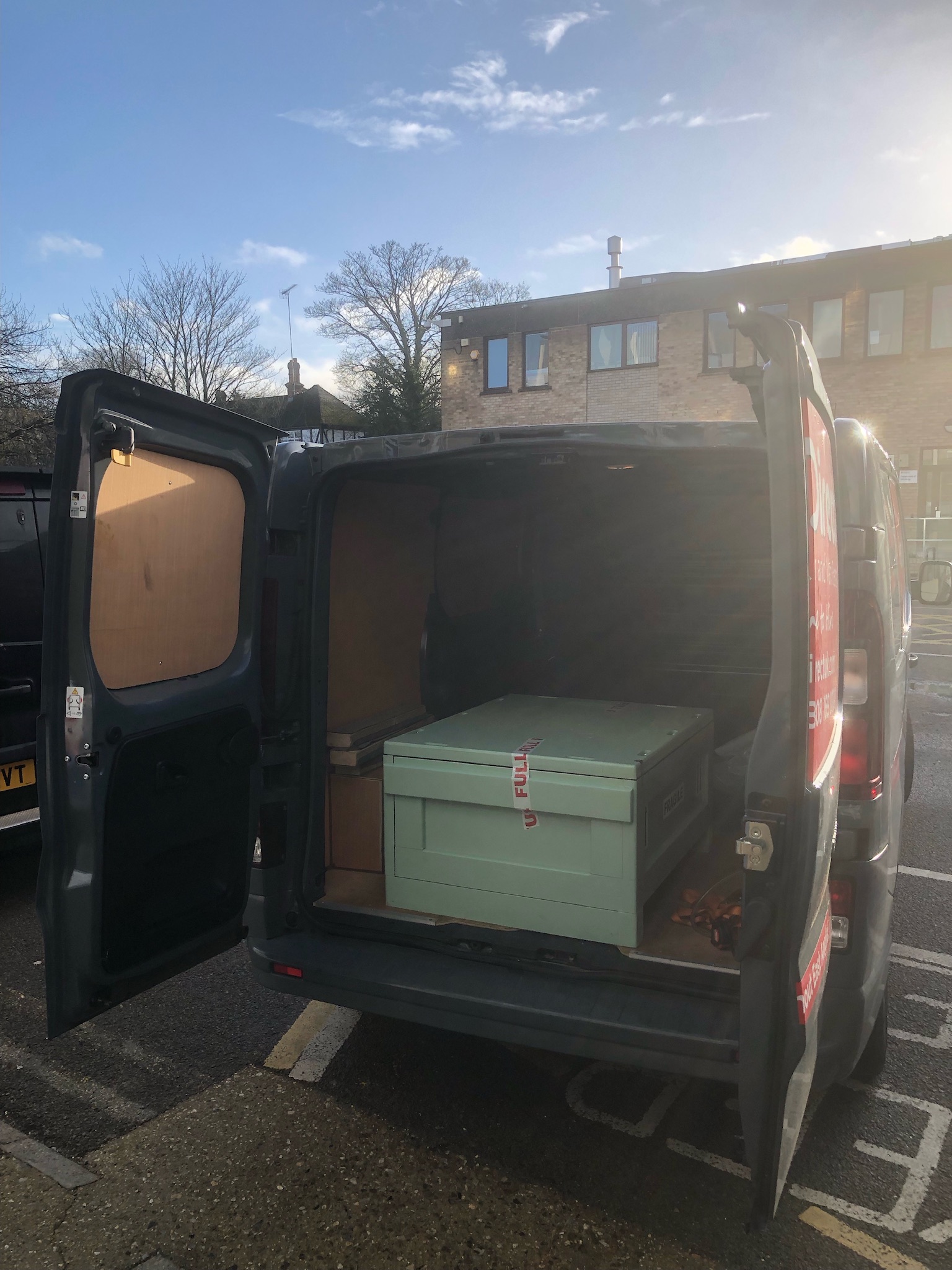 The sun shines during the unloading of objects for CT scanning at Addenbrooke's Hospital. 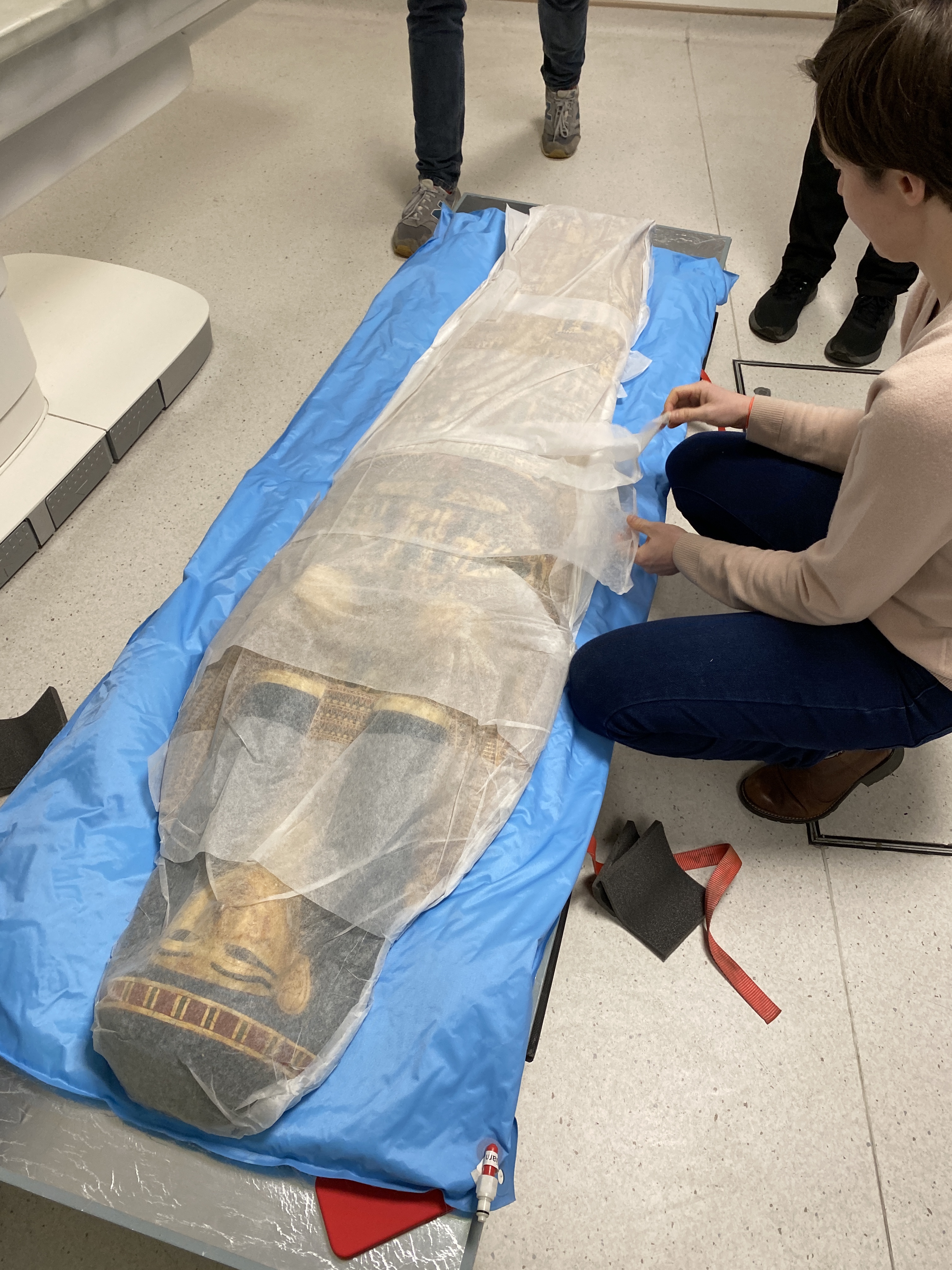 Flavia Ravaioli lifts the final layer of tissue paper off the front of Nespawershefyt's mummy board. 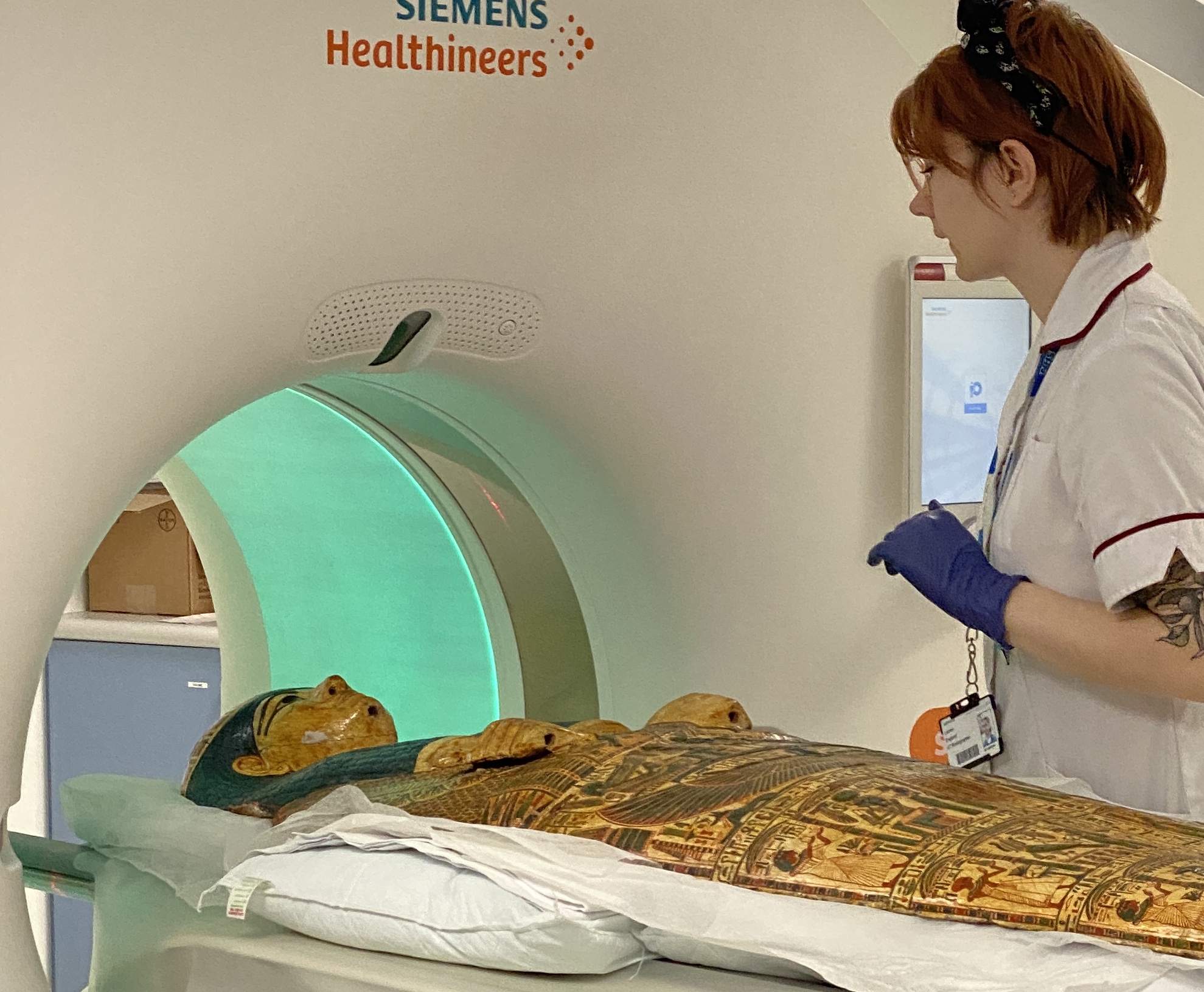 CT Radiographer Lauren England checks the position of Nespawershefyt's mummy board in the CT scanner. 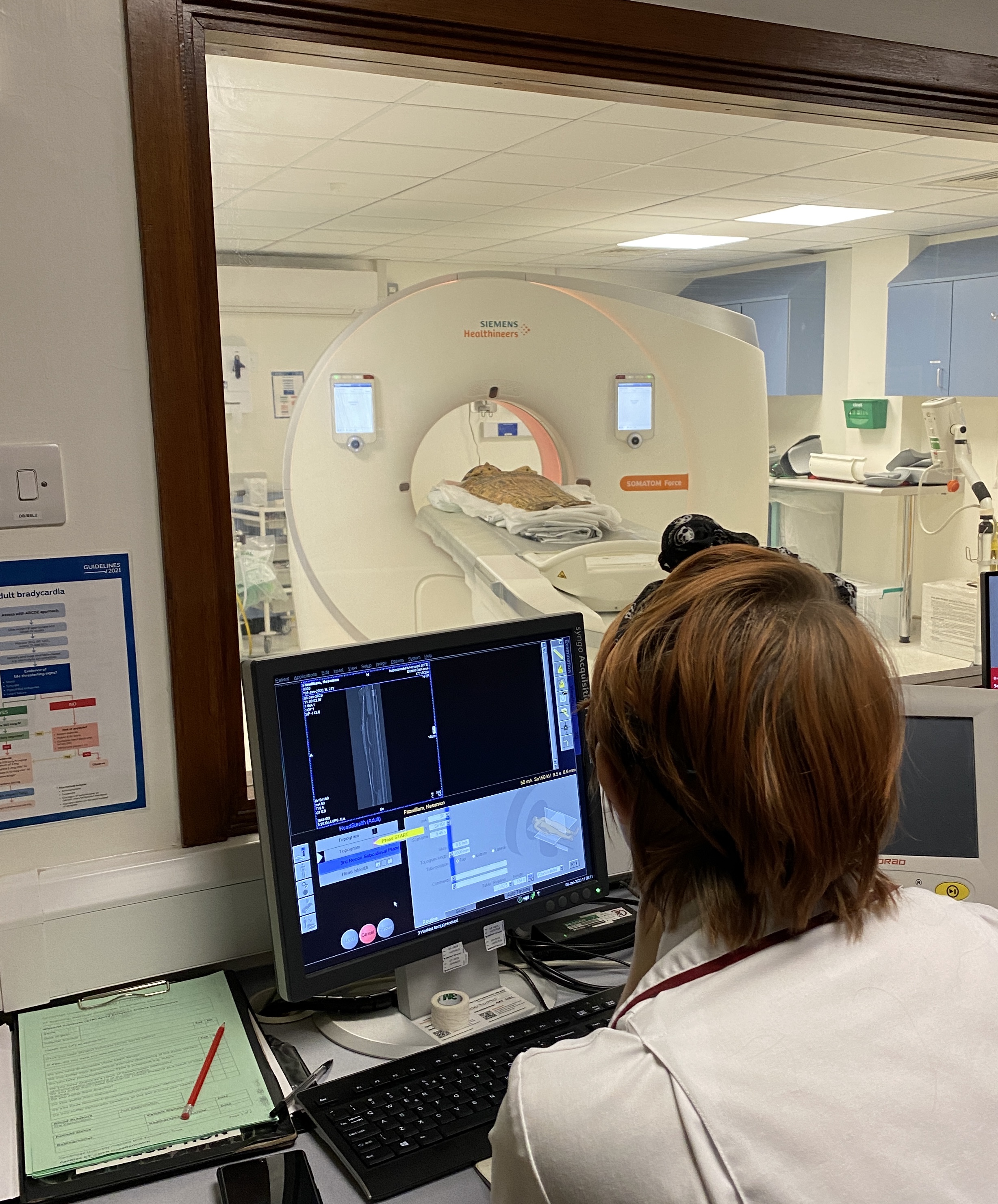 CT Radiographer Lauren England watches the progress of the first scan on a computer screen. 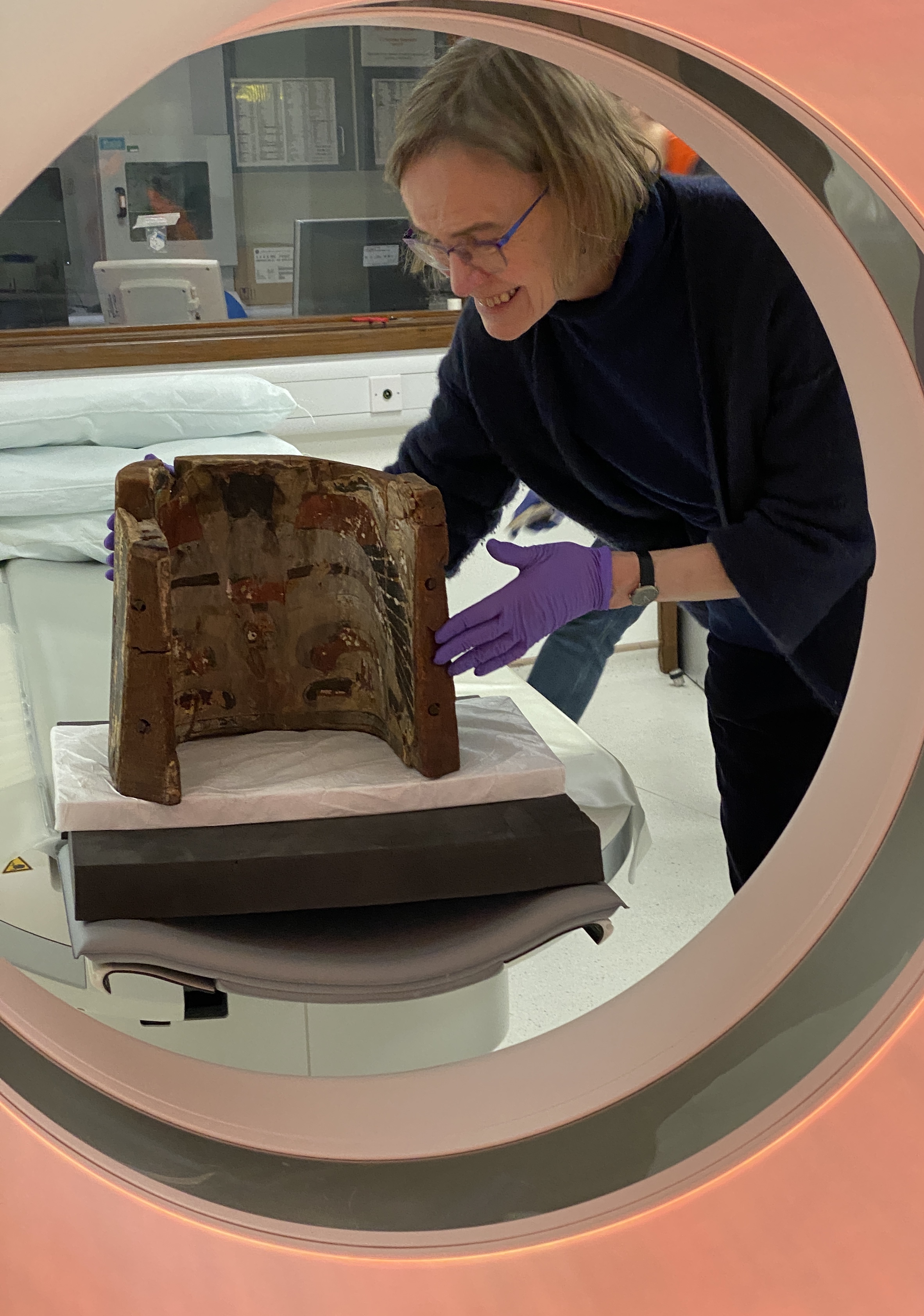 Julie Dawson positions the head end of another yellow coffin (E.1.2004) for scanning.
Previous Next