As you’d recall from an earlier post (which you can read about here, in July 2019, some of the Fitzwilliam’s Egyptian coffins team travelled to Cairo to trial their successful ‘Pop-Up’ Museum. One of the key venues during this trip was the Pinocchio furniture showroom in Maadi, a high-end furniture store owned by Amr Orensa and Marwa Medhat that produces many handcrafted wooden pieces inspired by ancient Egyptian designs. The success of this visit, which was co-delivered with colleagues from the Egyptian Museum Cairo, led to some exciting new discussions with Amr and Marwa about bringing the ‘Pop-Up’ back to Egypt, but outside Cairo to the less densely populated Mediterranean coastal town of Damietta.

The reasons behind our eagerness to take the ‘Pop-Up’ to Damietta, is the city’s relevance to our research interests in ancient Egyptian woodworking. Since at least the 19th century, Damietta has been the heart of Egypt’s modern day woodworking industry. Upon entering the city, for example, you are welcomed by massive timber yards, local workshops and numerous furniture factories. In fact, there are around 35,000 registered workshops and factories in the city, which means it’s an important source of employment for the local community.

On November 27, 2019, we showcased our first ‘Pop-Up’ at Pinocchio’s furniture factory, which is located in the centre of Damietta’s industrial district. The ‘Pop-Up’ was co-delivered by Fitzwilliam researchers and specialists (Julie Dawson, Dr Geoffrey Killen and myself) alongside Egyptian Museum curators and conservators. Factory workers, designers and even security men attended the ‘Pop-Up’, enthusiastically trying out all the ancient Egyptian replicated tools and learning about ancient Egyptian carpentry techniques. It was very satisfying to see their level of engagement as they cheered when some of them experimented drilling a hole in the wood with a replicated ancient Egyptian bow-drill, probably the first mechanical tool in history, according to Killen. Our visit to the factory also gave us the opportunity to have a tour and learn about the types of modern techniques Egyptian woodworkers employ today.

On the same day, we took our second ‘Pop-Up’ to Misr public library, which overlooks the Nile and Damietta’s historical bridge. It was wonderful to see everyone’s positive reactions. People actually started approaching us and asking questions while we were still setting up! Around 50 people came, including a young lawyer who was very impressed and shared on social media how much he enjoyed experiencing the revival of his ancestors’ past in the present and experimenting with his hand-made paintbrush the same way the ancient Egyptians made it. We also met an Antiquities Inspector who highlighted the importance of hosting such events in Damietta, especially given that in the past few years excavations have yielded some interesting finds related to an ancient Egyptian presence in Damietta.

On the 28th November, we had our third and final ‘Pop-Up’ for this trip at the Olympic Sports Club. It was by far our longest ‘Pop-Up’ in Egypt to date which lasted for 6 hours non-stop! We received at least 200 people from a range of diverse backgrounds, including furniture design students, children, parents, university professors, sportsmen, doctors, workers and engineers! There was widespread interest in Geoff’s demonstration of the tools, the Arabic translation of our recent publication ‘How to make an Egyptian coffin’ and the videos we had on an iPad, especially the one showing how Egyptian blue was made. We also had many people interested in making and using their own replica ancient Egyptian paintbrushes, while others were curious about the different phases of the painting techniques and pigments on our replica coffin section. Having experts and Egyptologists with us made space for more public engagement through questions about ancient Egypt beyond the subject of our ‘Pop-Up’, which reflects the high level of immersion and interaction that they enjoyed. We actually found it quite hard to wrap up and leave after 6 hours! Until the very last minute, even though we had already packed everything up and were ready to leave, people still approached us asking questions!

One particular highlight was the group of furniture design students who kept asking to have their photograph taken with Geoffrey Killen once they realised he is the Geoffrey Killen who published three volumes of ‘Ancient Egyptian Furniture’, which they use as a reference in their studies. Another highlight was when one of the children said he felt the ‘Pop-Up’ was just like watching a National Geographic episode except that it was live, and with the chance to ask questions!

Taking the ‘Pop-Up’ Museum, along with museum experts, research material, replicas and real objects (when possible) to cities that have little cultural provision, such as Damietta, is - in my opinion - exactly what outreach should be about. The amount of enthusiasm, engagement and interest people had in the ‘Pop-Up’ Museum was absolutely invaluable. We were all asked repeatedly when this event would happen again, if we would be there tomorrow, where people could check our latest updates, if we had a website, if we could organise a trip to the Egyptian Museum in Tahrir guided by our team of curators, Egyptologists and conservators, if there would be visits from more experts sharing their research from museums in the UK, if they could buy more of our books about ancient Egypt and so on!

But, our time in Damietta did not stop there! We were also introduced to furniture design students and professors from the Danish Royal Fine Arts Academy, who happened to be at a workshop in Damietta for the week with the Pinocchio furniture factory. We had a tour with them in Ras El Bar, 30 minutes away from Damietta, which is famous for its summer houses, where we explored the few remaining wooden houses that survive. In the evening Geoffrey and Julie gave a presentation to the Danish students about ancient Egyptian carpentry, design, painting and pigments.

During this trip to Egypt, we also held a two-day workshop in Alexandria at the Bibliotheca Alexandrina (17th-18th November) which was co-organised and delivered by members of the Fitzwilliam Egyptian coffins team, Helen Strudwick and Julie Dawson, curators and conservators from the Egyptian Museum Cairo, Nour Mohamed Badr of the Grand Egyptian Museum Conservation Center, as well as Nesrin El Hadidi, Professor of Conservation at the Faculty of Archaeology, Cairo University. Its main focus was looking at the structure of ancient Egyptian coffins as well as the painting techniques used back then. Initially, the plan was to have 20 participants but so many people registered from the Antiquities Museum, the National Museum of Alexandria and Alexandria University Antiquities Department that double the number of the participants had to be accommodated. Throughout the workshop there were many questions and interesting discussions between the participants and the presenters. The team from the Egyptian Museum Cairo team were eager to share what they had learned from an earlier workshop we ran in Cairo, and they gave an engaging demonstration of using the tools and explaining the woodworking process. A journalist from the Daily News Egypt also attended to write an article about the workshop. In an informal chat she said how much she was enjoying the workshop and that her aim of attending was no longer just to write her article, but also to learn more about the ancient Egyptians and the interesting techniques they used in woodworking, painting and making pigments. Next day after the workshop was over, Helen and Julie paid a visit to the National Museum of Alexandria, where they came across one of the workshop participants who works for the museum. She told them that she had already started planning how to make replicas that they could use in a similar workshop! We also received a lot of feedback from participants about how the workshop would shape the way they look at coffins in their own research in the future.

You can also read Julie Dawson’s account of her experiences of this outreach trip to Egypt here. Julie’s role in this strand of the project was generously supported by an ICOM UK - British Council travel grant. 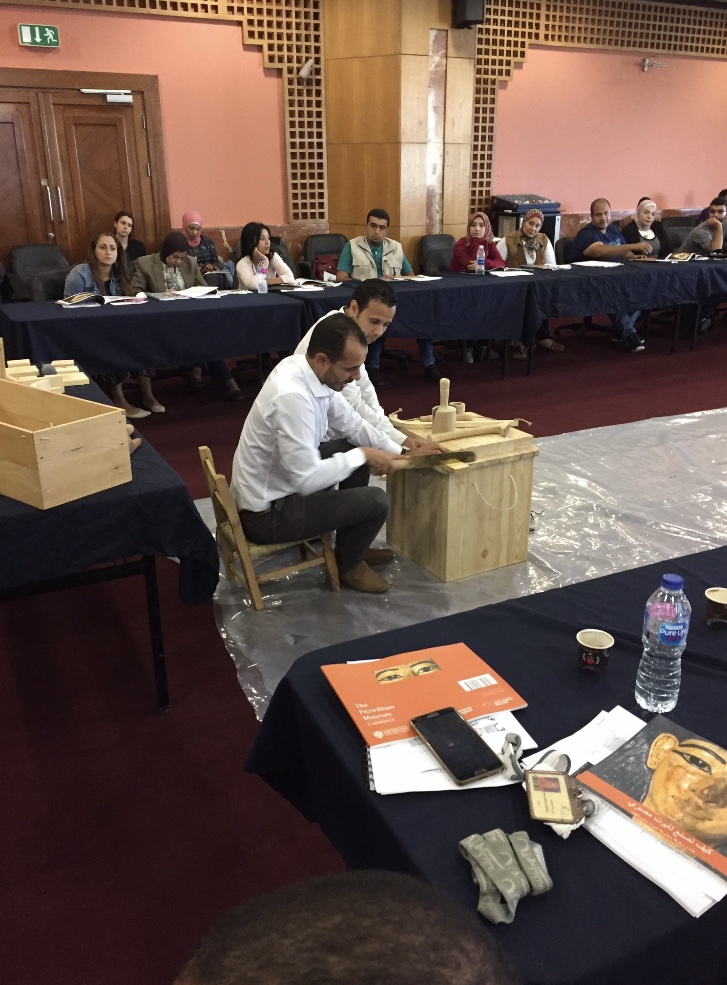 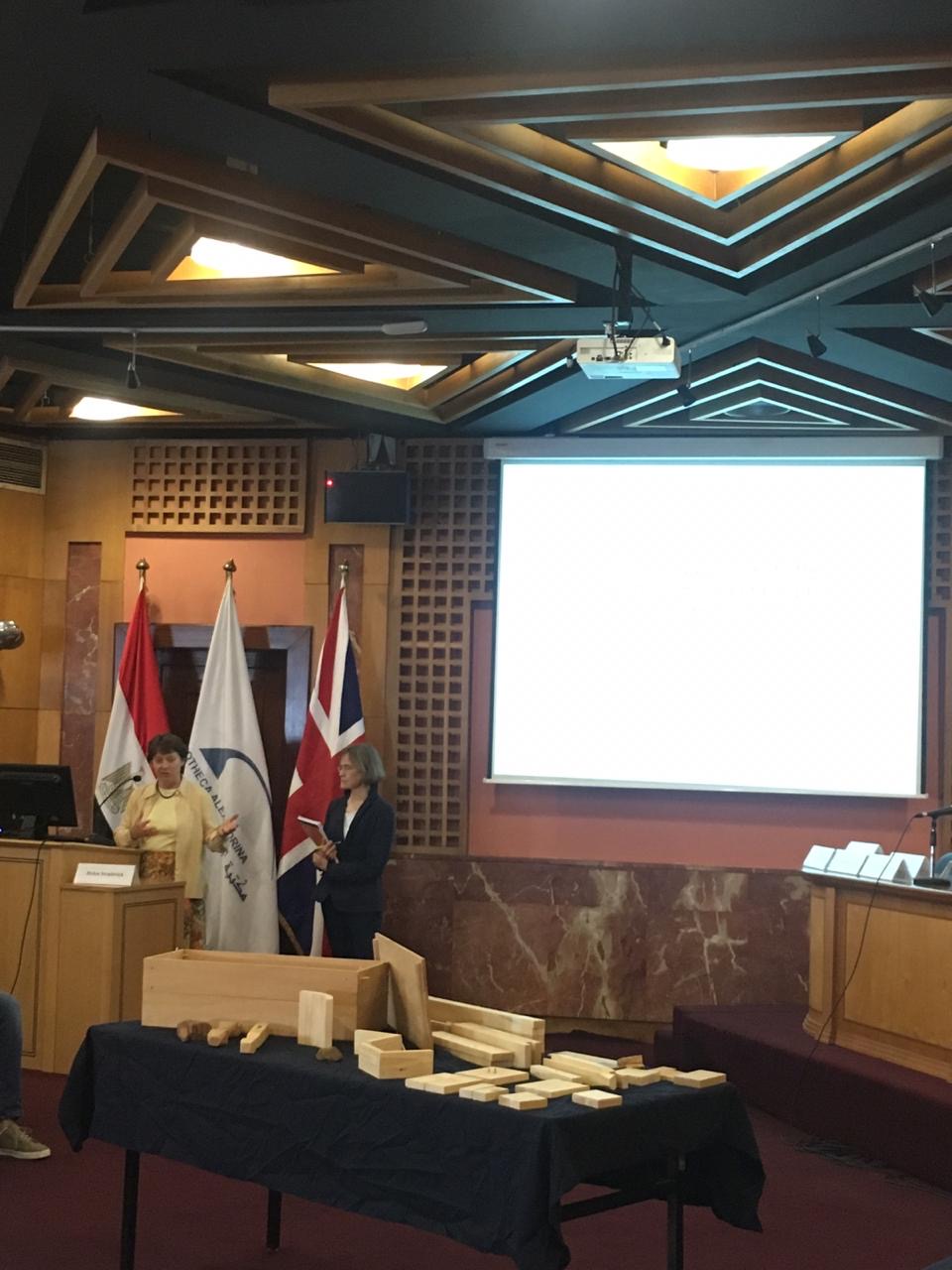 Helen Strudwick and Julie Dawson delivering the opening lecture for the workshop. 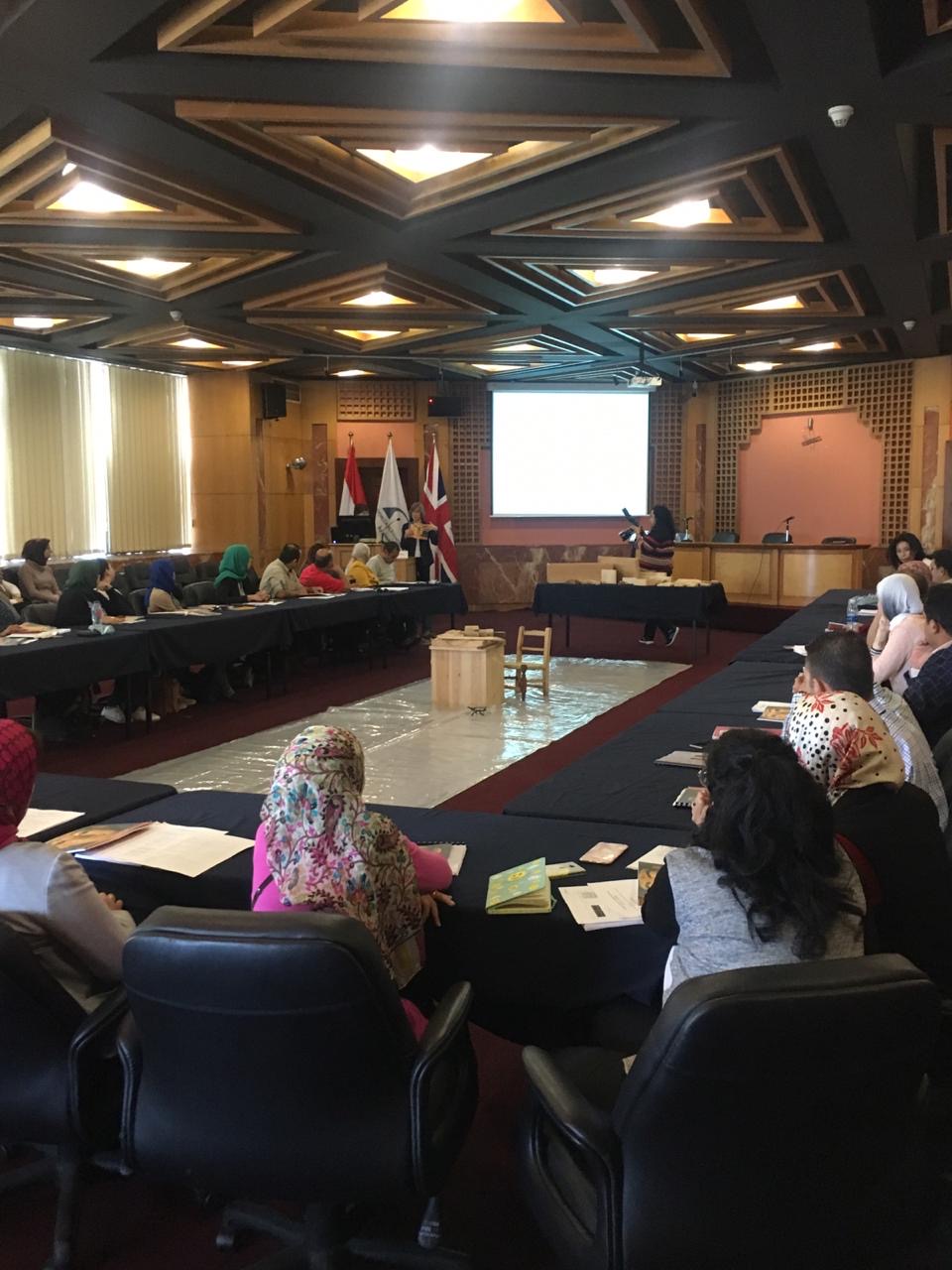 Participants in the Alexandria coffins workshop.

Helen and Julie with EMC conservator, Eid Mertah, at the Alexandria workshop. 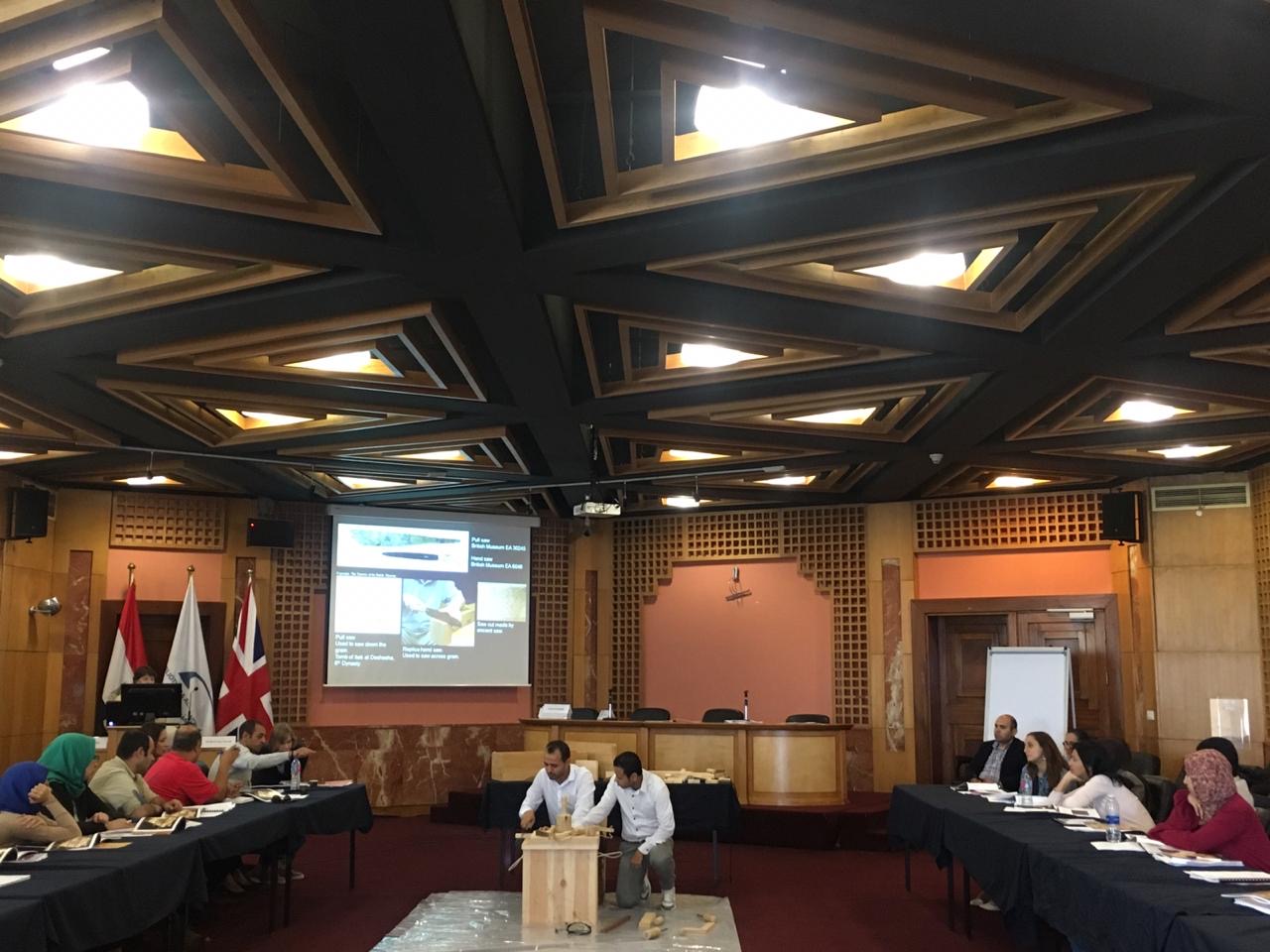 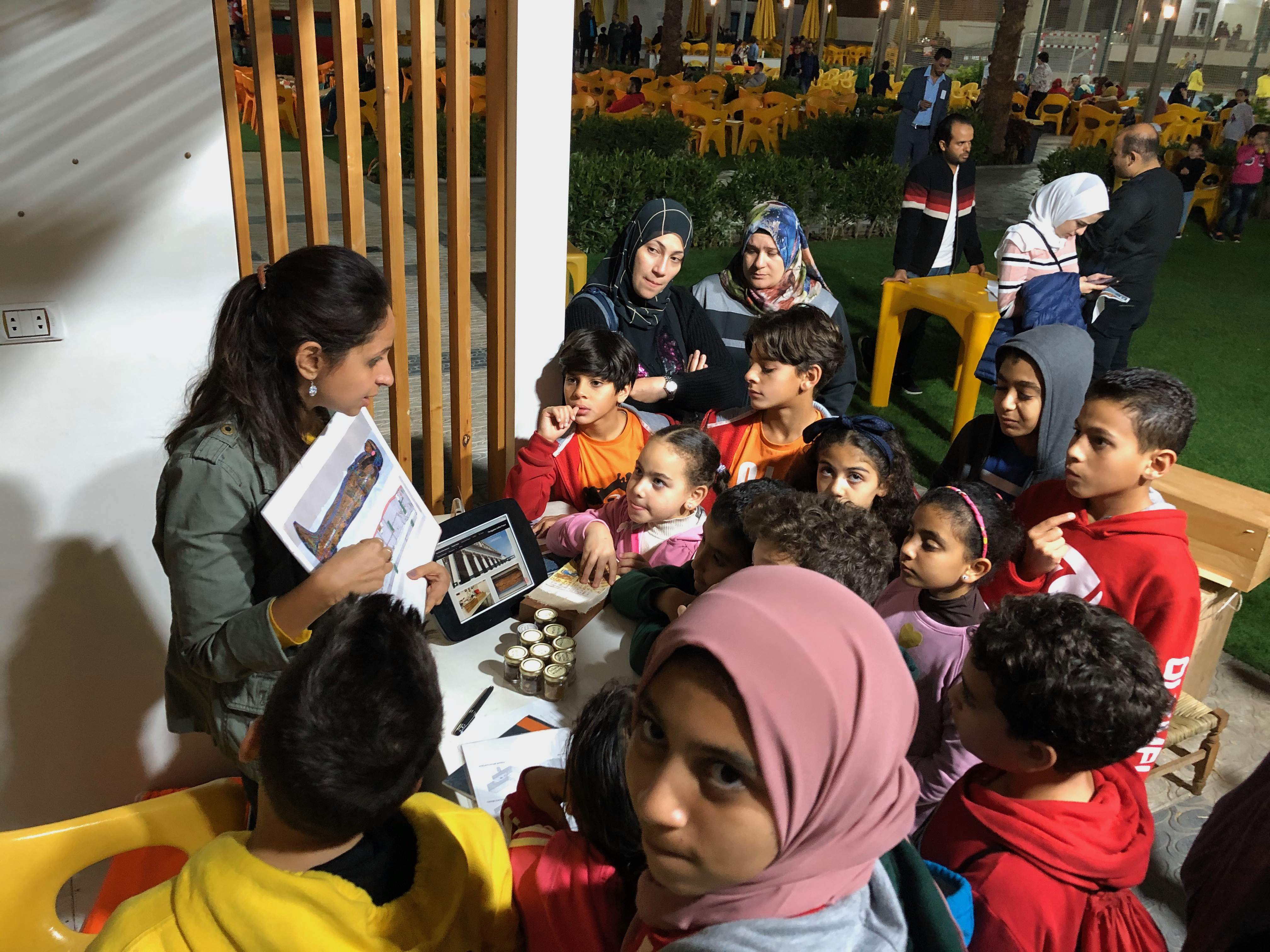 Sara Hany Abed explaining the benefits of CT-scanning coffins to children in Damietta. 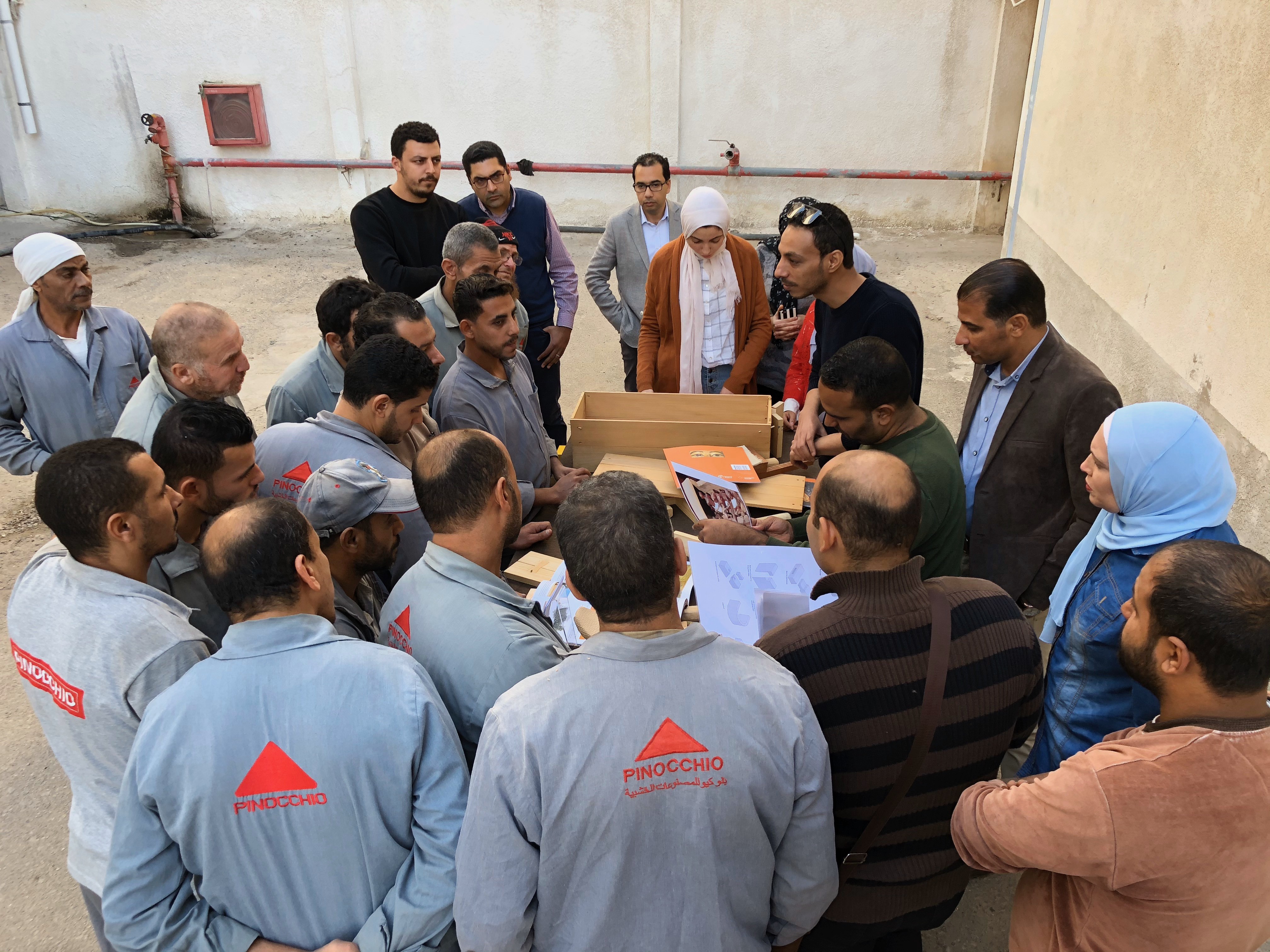 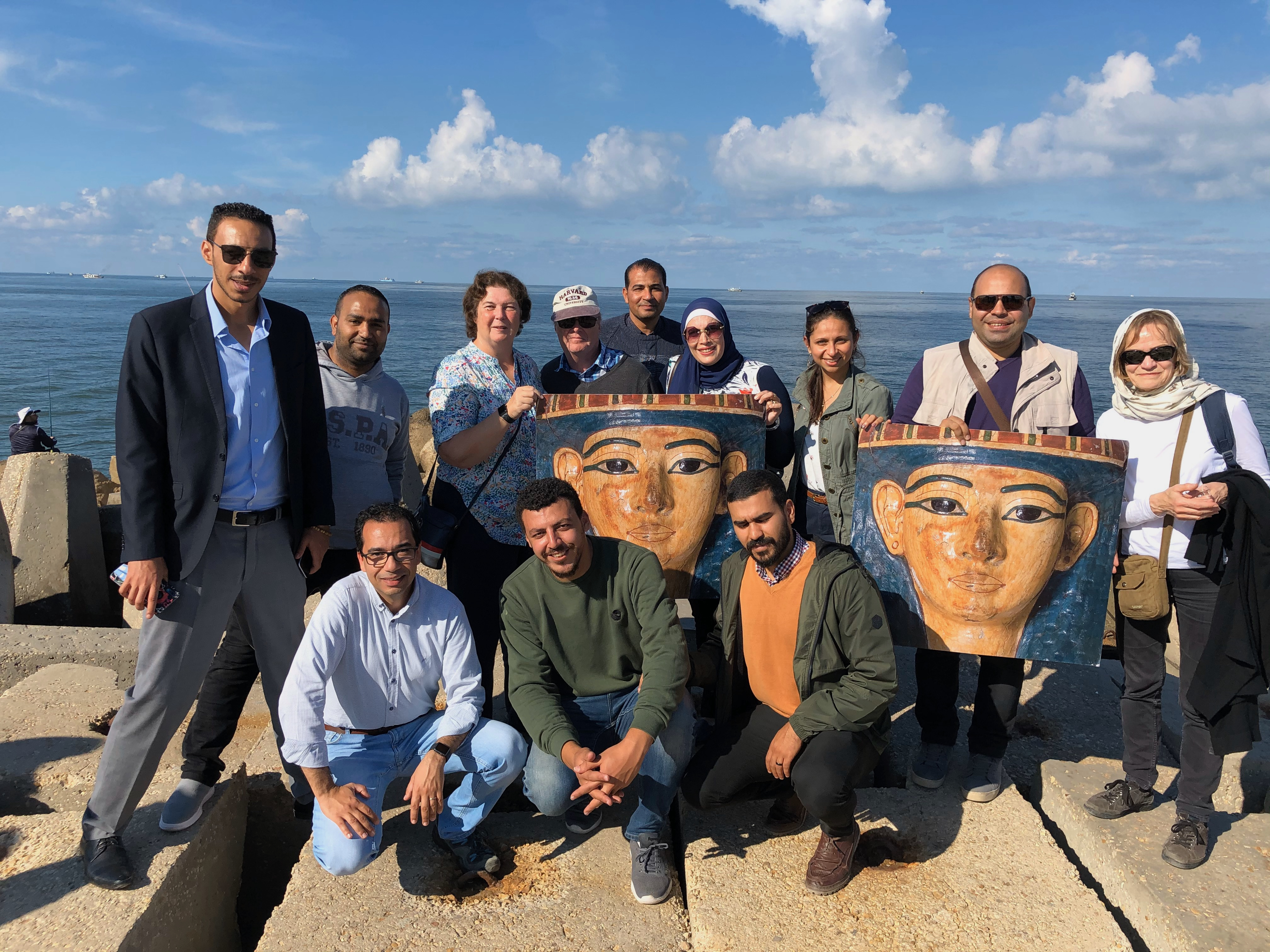 Members of the joint UK-Egyptian 'Pop-Up' team at Ras-El Barr near Damietta. 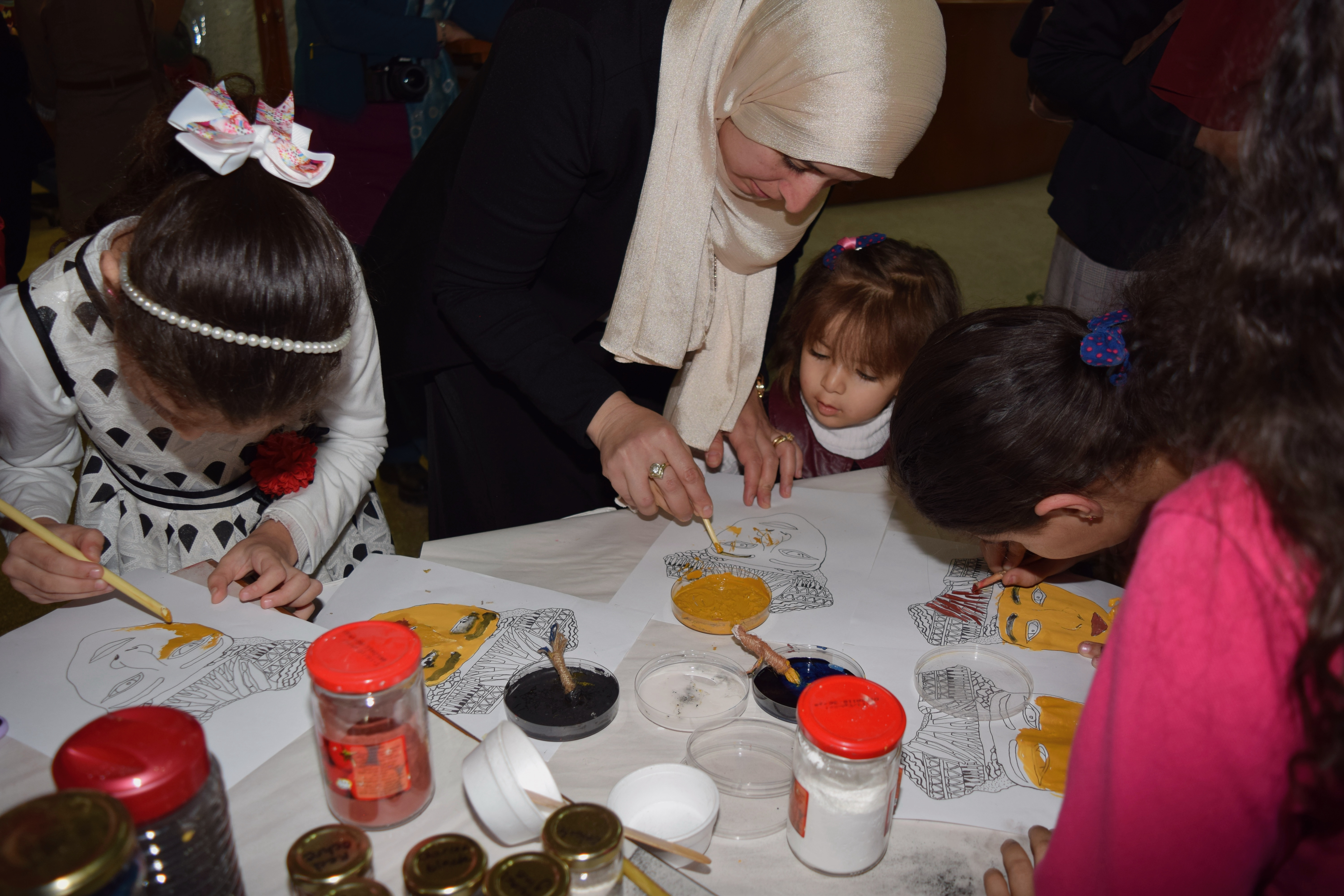 Children enjoying the painting activity at the 'Pop-Up' Museum in Damietta. 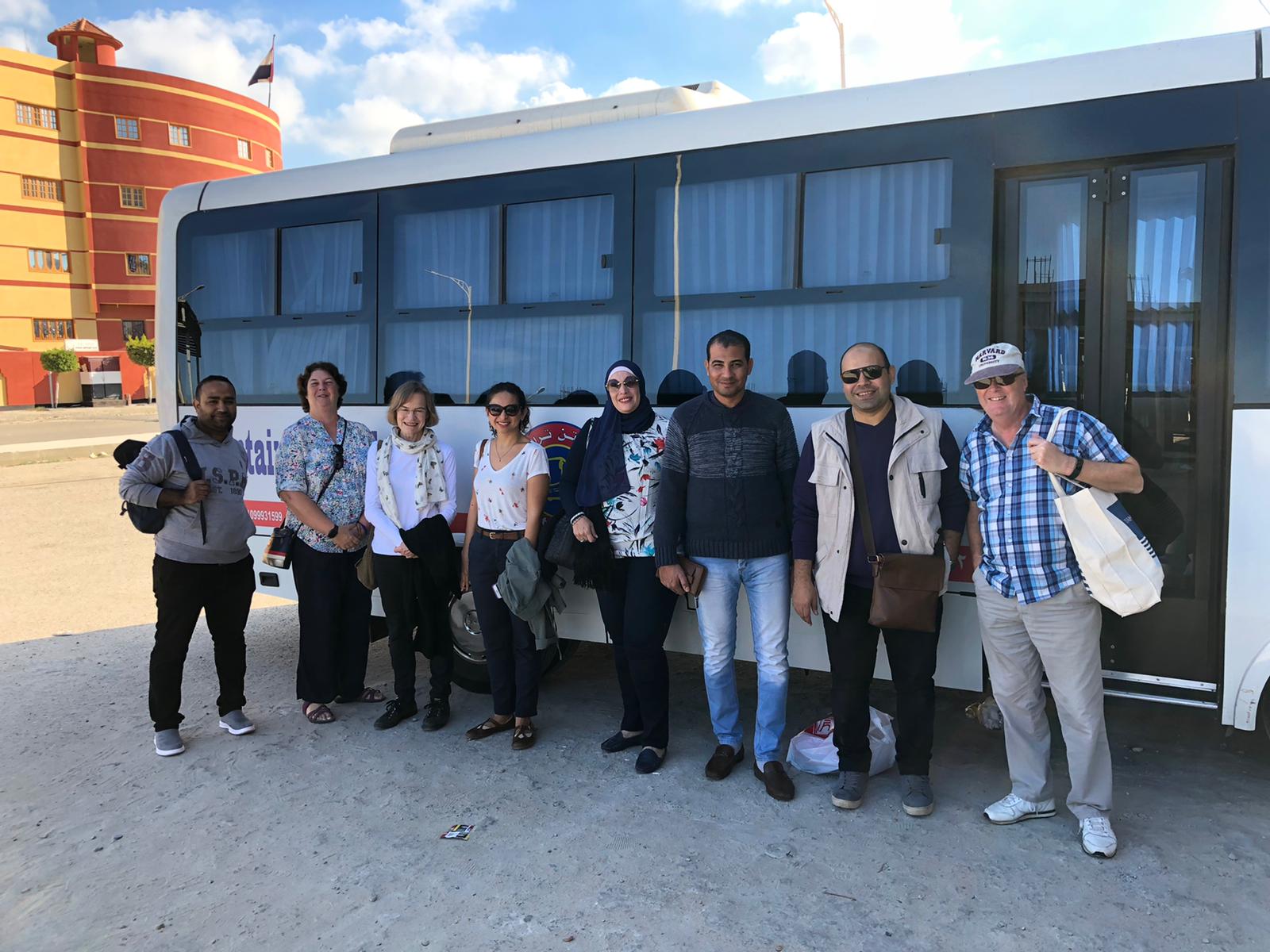 Members of the joint UK-Egyptian 'Pop-Up' team arriving in Damietta. 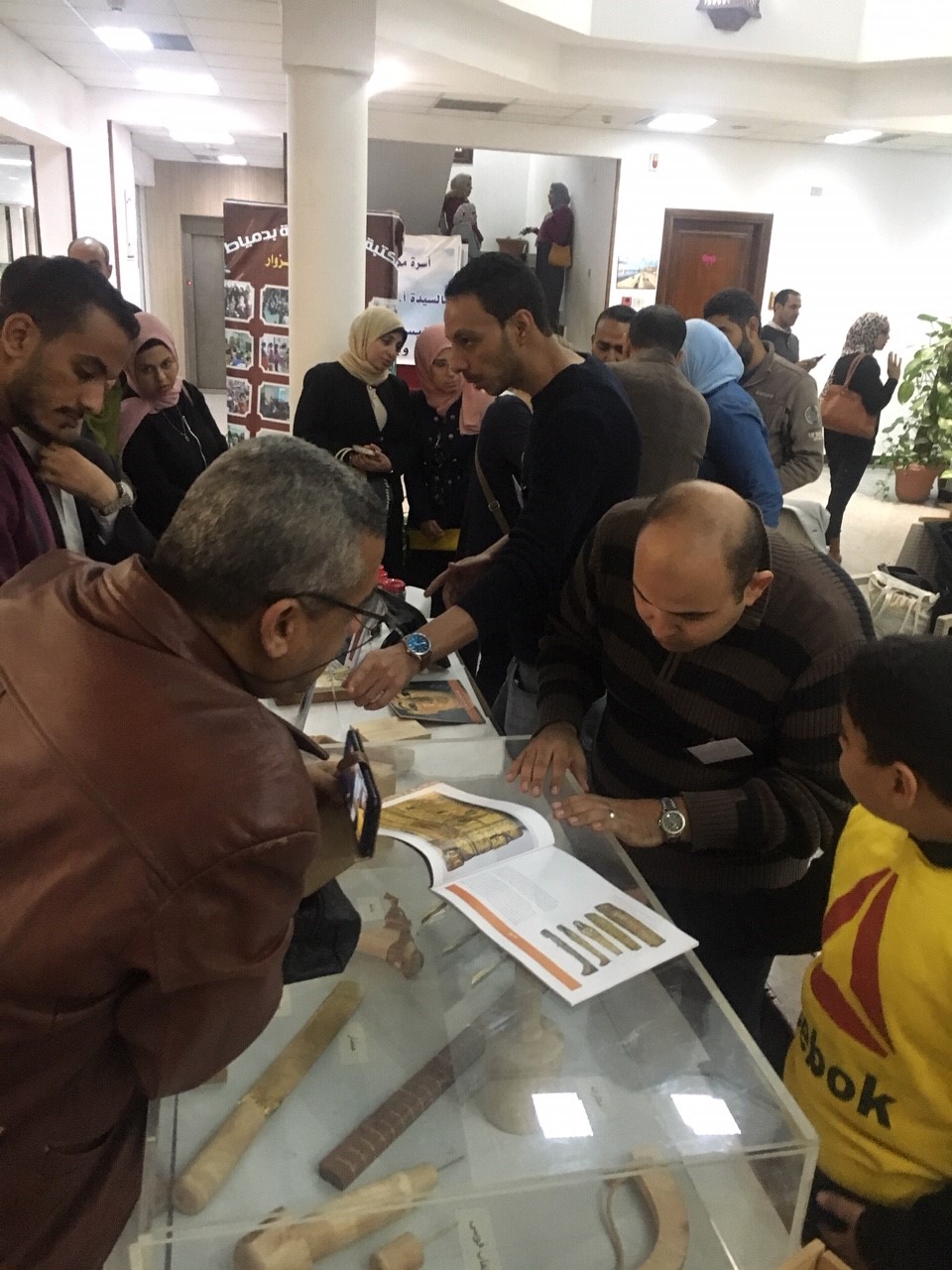 EMC conservators share their knowledge of coffin construction at the 'Pop-Up' Museum in Damietta. 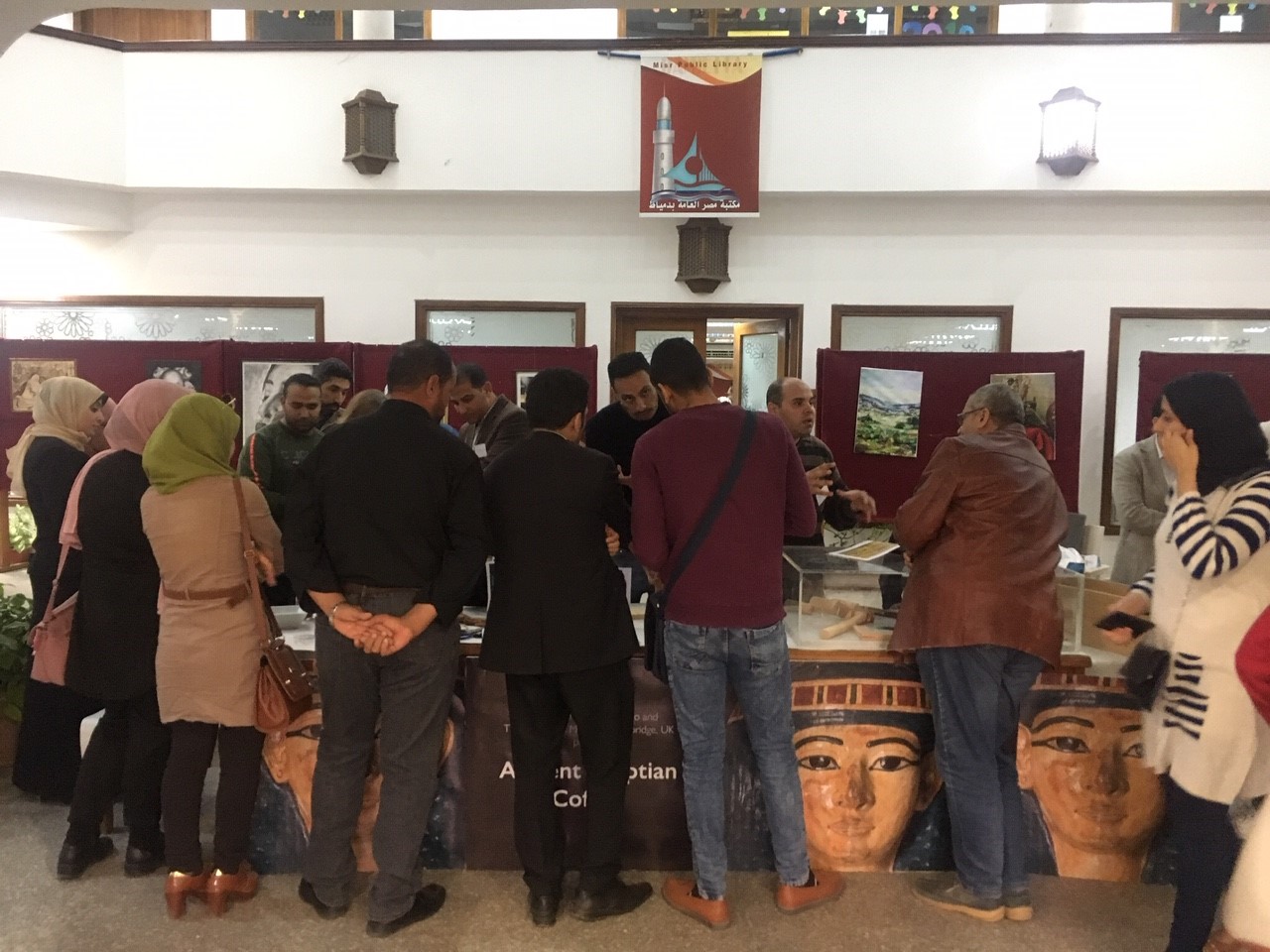 The 'Pop-Up' Museum at the local library in Damietta, Egypt.
Previous Next