Last week, Julie Dawson and Helen Strudwick travelled to Liverpool to look at Middle Kingdom coffins and coffin fragments housed in the Garstang Museum and World Museum. We were looking at the way these coffins had been constructed and decorated.

In both museums we examined pieces that have features such as cut-through old joints, which indicate that they were very likely to have been made from re-used wood. On anthropoid coffins we can sometimes see from the shape of planks and positions of joints that the reused wood must have come from other coffins. Unfortunately, on these rectangular box coffins, that is usually much less clear - but, it is nonetheless, intriguing to have such features present.

One coffin fragment at the Garstang impressed us by its large scale. Looking at the edge, we could see how thick the wood is, the remains of the dowels that were used to fix it to a lower panel, to form the complete head or foot end panel of a box coffin, and the large mitre joints at either edge that would have been used to fix it to the long panels on either side.

Some great details in the decoration also showed up, like the addition of an f-sign to the word tomb (iz) on some planks of wood belonging to a coffin in the Garstang Museum. The inscription is mainly written with a black outline around individual hieroglyphs filled with what is very likely to be Egyptian blue. Here, instead of just saying “tomb”, it now reads “his tomb”, which suggests that this particular coffin was made and inscribed for no particular person but waited “on the shelf” in the coffin makers’ workshop, ready to have the gender and name added when it was purchased. This hypothesis is strengthened by the fact that the name and title(s) of the owner, a person called Ipi, are written in a different style to the rest of the inscription.

At the World Museum, as well as coffin fragments, we had a chance to study a complete coffin belonging to a woman named Hetepi. It’s unusual for such an old coffin to survive so well, so it was a rare treat to be able to get so close up and spend time looking at it. Among the intringuing things about this particular coffin was the sketchy way the hieroglyphs on the foot end of the coffin had been written. It is possible that the painting-in of the hieroglyphs had not happened in this area, or that the paint had been abraded here for some reason revealing the underdrawing. In any case, it was great to see the different thickness of the line in different areas.

Our heartfelt thanks to Gina Criscenzo Laycock and her dedicated band of helpers at the Garstang and to Ashley Cooke at the World Museum for their generosity in making the collections available to us and for looking after us so well. 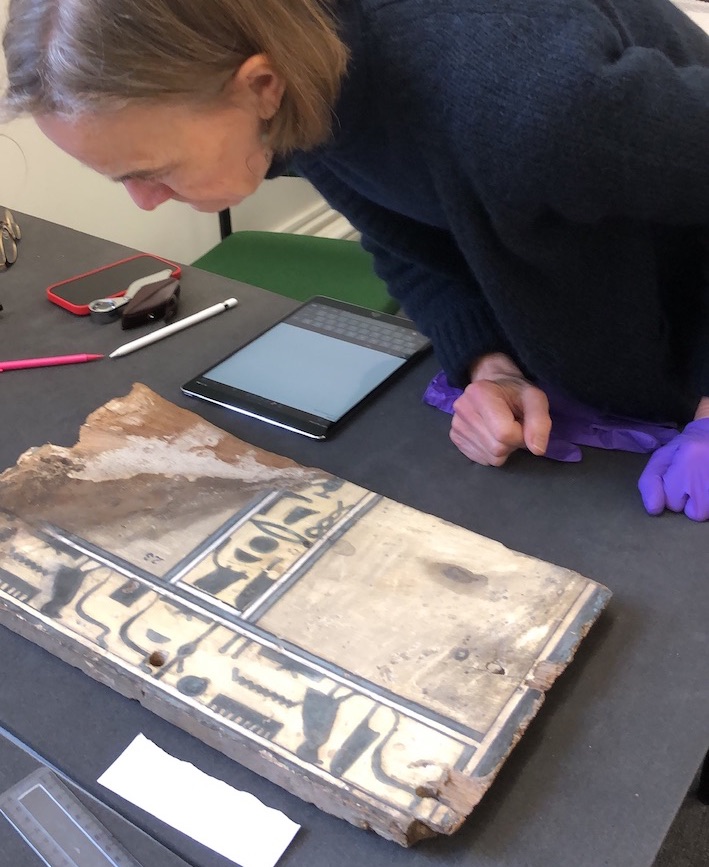 Julie Dawson examines the panel from the head or foot end of a Middle Kingdom coffin at the Garstang Museum. 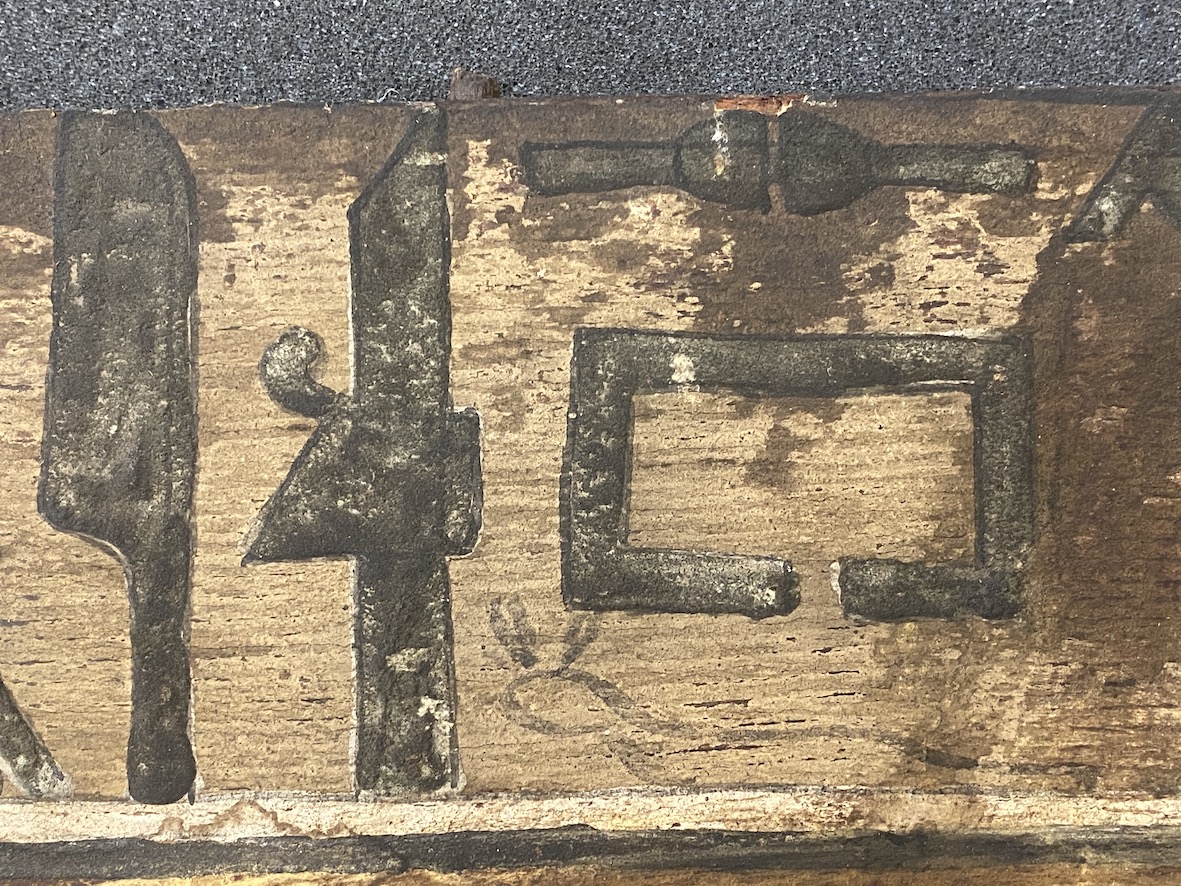 Detail of the word iz (tomb), with an extra f-sign written in black ink on a coffin fragment in the Garstang Museum.

Merged images of the lower edge of a very large substantial end panel from a coffin at the Garstang Museum. 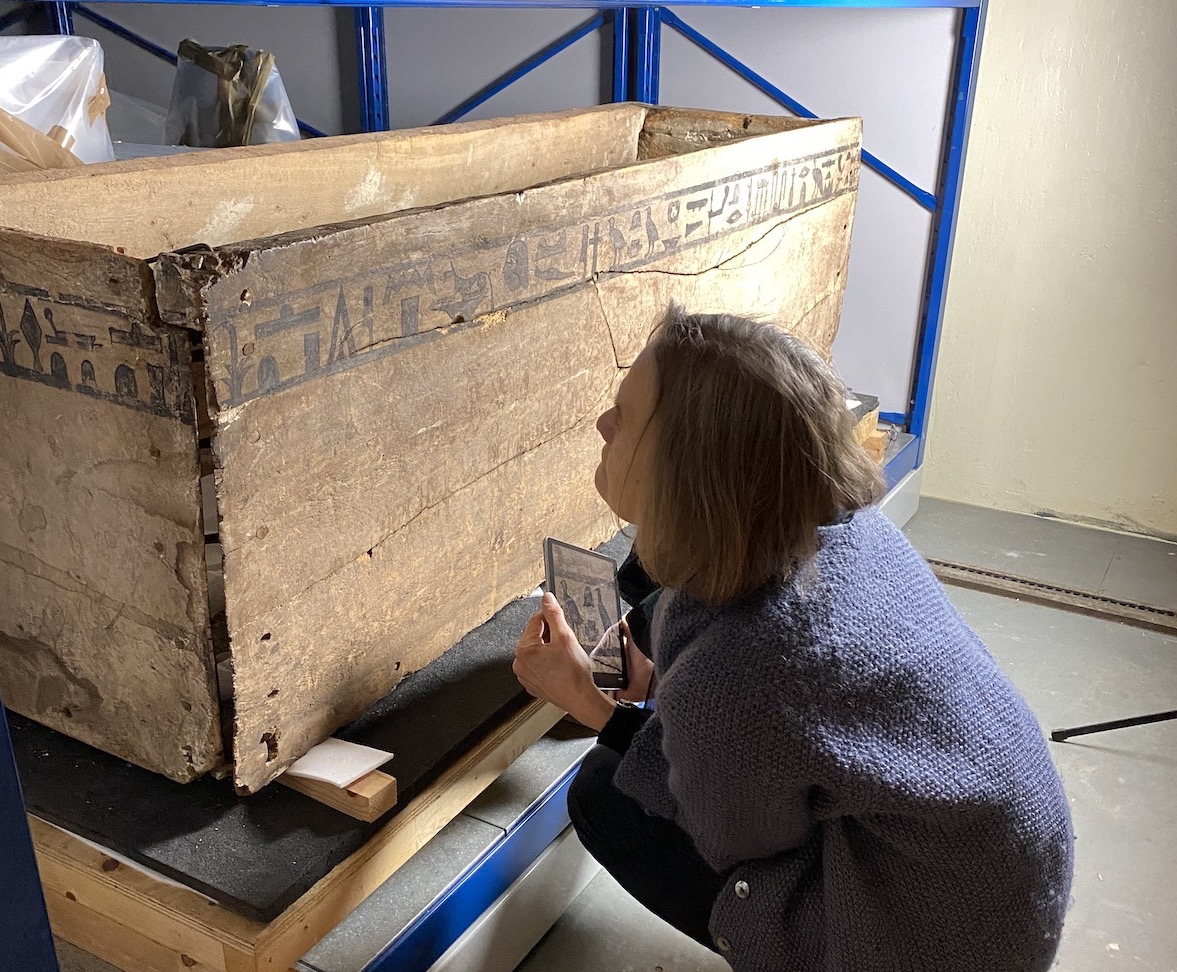 A complete coffin belonging to a woman named Hetepi at the World Museum, being studied by Julie Dawson. 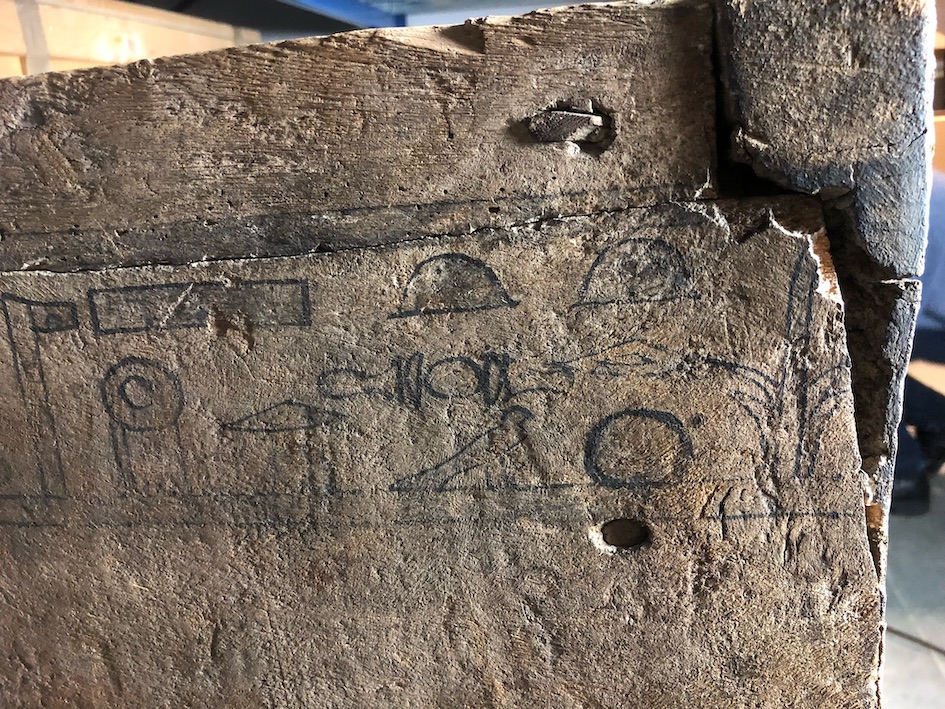