The portrait of Didyme was a bequest to the Fitzwilliam Museum in 1981 (Phyllis M. Cook, 1981). Unlike the other portraits in the Museum collection, the specific provenance is therefore unknown. A letter in the Fitzwilliam files indicates that Professor A. F. Shore suggested that Didyme is an Antinoopolis portrait dating to the later 2nd century AD. K. Parlasca, a leading scholar in the field, agreed this provenance in correspondence. The thickness of the panel as well as the characteristic way in which it has been trimmed with shoulders is indicative of an Antinoopolis provenance (See also Corcoran 1995).

Analysis: Encaustic method. The support is made from a single piece of wood identified as sycomore fig by Caroline Cartwright from the British Museum in 1996. The grain runs vertically and the wood is cut from near the centre of a smallish tree. The panel has a slight concave warp. Pieces of dark resin and textile threads are adhered to the reverse of the panel and are materials associated with burial. There is a 3.2 cm vertical split up from the proper right hand bottom edge, about 2 cm from the edge. There is a slightly offset 4 cm long split on the reverse. Neither split runs through the entire support. There are some small scratches through the paint to the wood along the top edge of the painting. There does not seem to have been any previous treatment to the structure of the panel itself.

It is unclear whether the panel may have been sized prior to the application of a ground. The ground is brown in colour, is distributed throughout the painting and is visible along the bottom edge and along parts of the edges. The ground has dripped down the bottom edge and those edges at the side which have not been trimmed, and must have been applied whilst liquid. The medium is unclear, although it may well be encaustic. However, it appears more brittle and lean than the painting itself and is also grittier in consistency. In X-ray, along the edge where the ground drips down a centimetre or more, it appears whitish. This may simply be due to the thickness of the ground layer, but is somewhat unusual.

No underdrawing is visible. The decoration is applied using the encaustic technique. Given that an area of a sample was found to contain beeswax alone, it is likely that this portrait was painted using hot beeswax. Pigments identified from sampling include; chalk/calcite, lead white, dolomite, quartz/glass, alumina, charcoal, lamp black, yellow ochre, green earth, red lake (unidentified) and iron oxide red.

The tools used include brushes and spatula-like modelling implements. The technique is loose and bold and the surface relief is not uniform. The upper layers appear to be applied using a thicker and less fluid paint. This is visible in the modelling on the chest: the zig-zag pattern was painted over impasted brushstrokes running vertically. These brushstrokes were partially, but not wholly obliterated by this additional texturing. The shoulders of the panel seem to have been cut after painting, given that there is no ground dripped down the sides of this area and the brushstrokes and tool marks are curtailed abruptly. This was probably done shortly before the painting was bound into the mummy. The other edges are the original dimensions of the panel, given that ground is visible on the three sides. Once the ground was in place, the grey background was applied, followed by the bolder shapes such as the white robe and the face and hair. No reserve was left for the red clavi, nor for the necklace and the hair.

Quite a number of yellowish discolourations are visible although the origin of these is unclear. They could be staining from the other burial materials. Alternatively, they might be heat-related; perhaps the body had been left in the heat of the sun. In particular, there is a horizontal line of discolouration from the wrappings framing the bottom edge of the portrait. There are also a number of white accretions on the surface of the paint. These might well be lead soaps given their pitted and bubbly appearance. To the proper right of the face and above the shoulder, there is a fabric impression, which must have come from the bindings. The surface of the paint is slightly whitened where this impression is located.

There are losses to most of the edges including scratches through to the wood along the top edge. There are numerous abrasions and damages throughout the paint layer (see the attached photograph) including scratches through the face by the mouth. The date of these abrasions is unclear, although they may well be of some antiquity. The surface of the painting is in generally good condition. There is some cracking throughout most pigments. There is no active flaking, although the paint is slightly raised in certain areas (see the attached photograph).

Some previous treatment was undertaken to the panel, including raised paint laid using 5% Paraloid-B72 in xylene in May 1995 (Julie Dawson). Additional consolidation, often of the same areas, was undertaken with Paraloid B-72 at the same concentration, in February, July and October 1997 and in January 1999. The panel was loaned to the British Museum for the Ancient Faces exhibition in this year and thence toured to Rome, Paris, Frankfurt and New York.

Commentary: The portrait of Didyme is unusual and has sparked debate. The painting bears an inscription in Greek stating, ‘I am Didyme, aged 7’. There are thirty two surviving inscriptions on mummy portraits or related shrouds; twenty seven names survive (Corcoran 1995). Didyme is a female name, meaning twin, and yet the purple clavi stripes (indicative of citizenship, only conferred on males) and white tunic in this painting are more typical of the clothing worn by a boy. A comparison of the portrait of Didyme with other portraits of children from Antinoopolis indicates that the hairstyle is in keeping with portraits of girls and boys (Walker and Bierbrier et al. 1997). However, the male garb and lack of earrings make the female name unusual. Corcoran has suggested that the inscription may have been wrongly transcribed, having meant to be Didymos, the male version of the name. This is not the case; technical examination clearly shows an eta, Η, at the end of the name. Parlasca (2003) and Walker (1997) have suggested that the portrait was intended for another, male child, the inscription and necklace serving to clarify identity. This may well be the case, though there is no specific technical evidence to confirm that the painting was altered at a later stage as has been suggested by Nicholls in an unpublished piece in the Fitzwilliam archives, an idea picked up by Parlasca (2003). Technical examination undertaken by the Hamilton Kerr Institute and R. Nicholls (then Senior Keeper and Keeper of Antiquities) in 1980 is said to have indicated that the painting was changed substantially before burial. It was reported that details, such as the necklace and the hair, were altered. It was also stated that earrings were removed and the inscription was added. As Nicholls states, both the inscription and the necklace were indeed added to the composition at the last stage. However, such details would typically be painted at the final phase of painting. 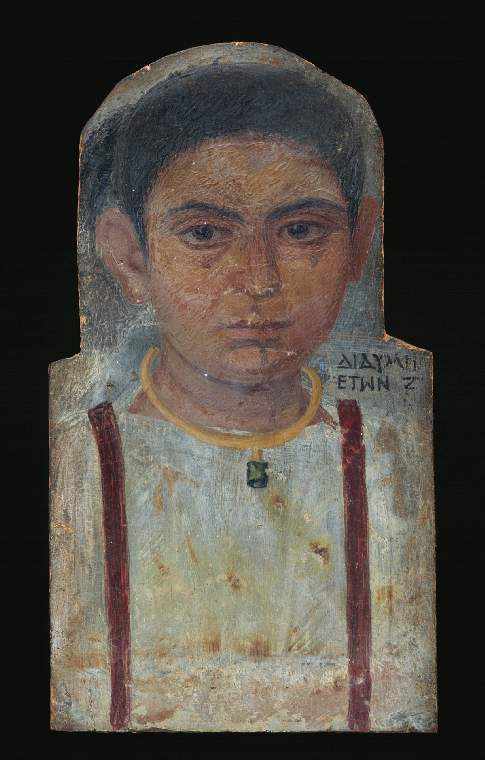