The Science of Colour

When they come to see the Death on the Nile exhibition, people are often surprised at how brilliant the colours on the ancient Egyptian objects still are and they ask whether they have been repainted and even if we retouch them ourselves. While the very thought of it tends to horrify the modern conservator, the question is a fair one and deserves some attention. By using some of our objects as examples, I will explain what the colours are made of, why they survived the way they did and show them to you under a different light (such as Ultra Violet light, for example).

Image 1 (below) shows a range of pigments typically used by the ancient Egyptians to decorate coffins, small objects and even tomb walls. Others include carbon black from soot or charcoal, red realgar and green earth.

These would have been ground and mixed with an organic binder (such as a plant gum or animal glue) to make paint. While some of these minerals may alter with time, as they undergo chemical changes, they do not, strictly speaking, fade as, for example, a vegetable dye would. That is why the colours on Egyptian coffins are still so vivid. It is also worth remembering that for most of their lives and before they were excavated, the objects lay in dark, undisturbed environments, which surely contributed to the preservation of the original colour.

Unlike the pigments mentioned above, the widely used Egyptian blue (see Image 2 below) is not found in nature, but must be manufactured - and rather laboriously too. Recently, experiments in recreating Egyptian blue and other colours were made for the exhibition.

Let’s take a look at these pigments on an object from the exhibition. Image 3 is a photo of a fragment of cartonnage showing the winged goddess Nut; Image 4 is a photo of the Nut cartonnage taken under UV light. UV photography can help conservators identify previous repainting, as modern paint often does not fluoresce and therefore looks different against any original surface.

Analysis has revealed that the white ground on the Nut cartonnage piece (Image 3) is mostly calcium, the red pigment is cinnabar, the dark blue areas are the copper rich Egyptian blue; this was also identified in Visible light Induced Luminescence or VIL (see Image 5 and further information online). The pale blue areas also contain Egyptian blue and have the same composition as the darker colour, but it has been mixed with the pigment lead white. The green areas have high levels of copper and silica, similar to the areas of Egyptian blue, this suggests the colour is Egyptian green. The yellow areas have very high levels of sulphur and high levels of arsenic, suggesting orpiment.

Orpiment can deteriorate and if exposed to extended periods of harsh light and pollution will turn from lemon yellow to a grey white. An example of this phenomenon has been observed on the papyrus of the Book of the Dead of Ramose, where the human figures’ skin discoloured due to unsuitable display conditions in the mid 20th century. Copper based colours can also misbehave chemically, but it is often hard to establish whether their slight change of appearance is due to the transformation of the pigment itself or the degradation of the binder.

The image of Nut under UV light (Image 4) does not show any areas of odd colour, with the exception of the tips of her right wing, which were recreated during a previous restoration and have now been removed (see image 3). This means we have no reason to believe any of the other colours are not original, as the manufactured pigment lead white was also in use in Egypt by the time this cartonnage was made (332-30 BC).

The decoration the coffin of Nakhtefmut (see Image 6) is quite impressive and a closer look (image 8) reveals not only the vibrancy of the colours, but also a fine hand and great attention to detail. Sometimes a layer of varnish was applied to the whole painted surface or selectively on certain areas. This would have saturated the colours and made them appear even more vivid, but also helped preserve the decorated surface. The varnish, seen on image 8 covering the writing on the top right corner, was originally more transparent, but now appears very yellow due to ageing. Varnished areas fluoresce under UV light (Image 7). Image 7 also shows how the modern repainting on the horizontal cuts at the back of the head stand out in different, non-fluorescent colours. The original white, calcium rich areas, heavily reflect the UV light and look pink in Image 7.

The mummy-shaped coffin of Userhet, where large areas of the collar and headpiece were retouched in modern times, is a rare example, in our collection, of the original appearance having been significantly repaired after damage (see Image 9).

Unfortunately, not all ancient artefacts survive in good condition and there was a tendency in the early days to try to restore them to their original form and beauty, even though they might have been greatly compromised. This form of restoration, obviously, had the appearance of the object as a priority, rather the integrity of its original materials. Today we are aware of how introducing modern materials can not only confuse the viewer as to what is original and what is not, but also can hinder future analysis and examination. Archaeological conservation today aims most of all at stabilising an object and stopping or significantly slowing down its deterioration. This is often achieved with a combination of methods that might include careful cleaning, the targeted use of reversible adhesives and consolidants, controlling the display and storage environment to optimal levels of humidity, temperature and light as well as careful handling and monitoring of any changes in time.

Generally speaking, retouching and colour matching can be done in conservation, but never in direct contact with an original surface; for example a fill can be applied to a missing area, which is coloured or in-painted not to look too different and distracting to the eye. Even in this case, the fill is more likely to be applied to give stability to a fragile object, rather than primarily to please the eye. Fortunately our understanding of very damaged, partial and fragmentary objects is much aided by technology and science today: analysis can detect even small traces of decoration such as pigments and finishes and digital images, as well as 3D printing reconstructions, provide an informed interpretation of what an object would originally have looked like.

Why not check out this interesting video on the making of the replica of Tutankhamun’s tomb? And find out more about Egyptian painting on the Fitzwilliam Museum website. 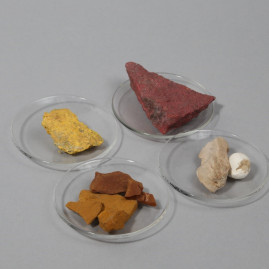 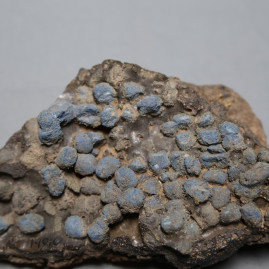 Image 2: Fragment of the inside of an ancient Egyptian kiln, with pellets of original Egyptian blue attached. 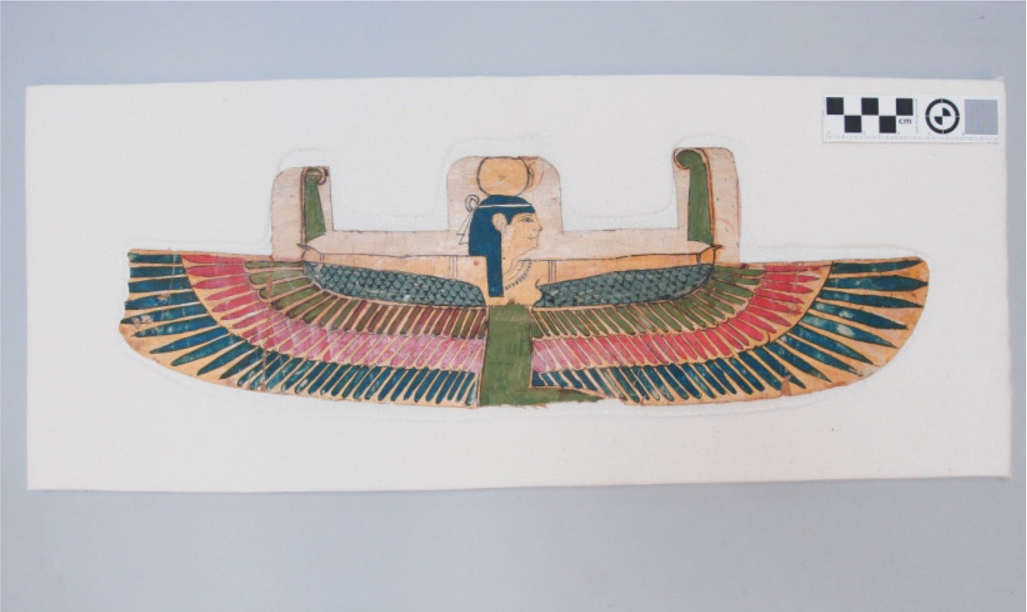 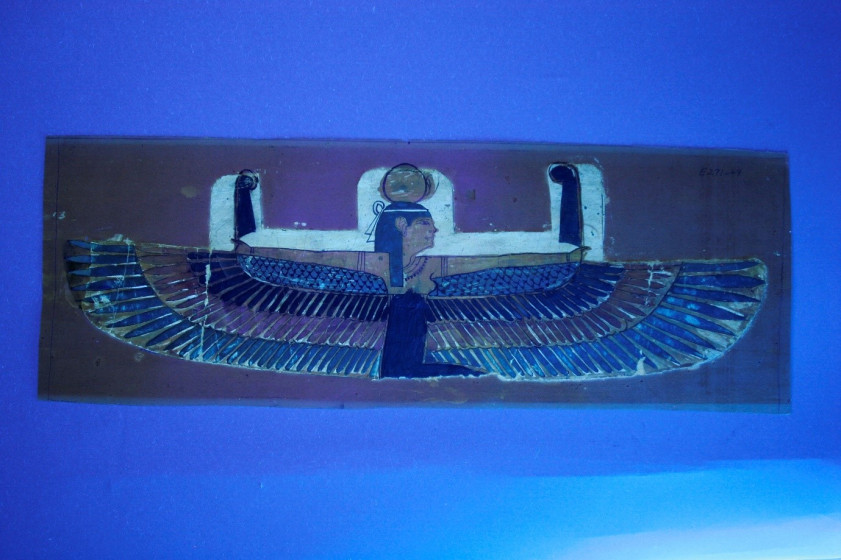 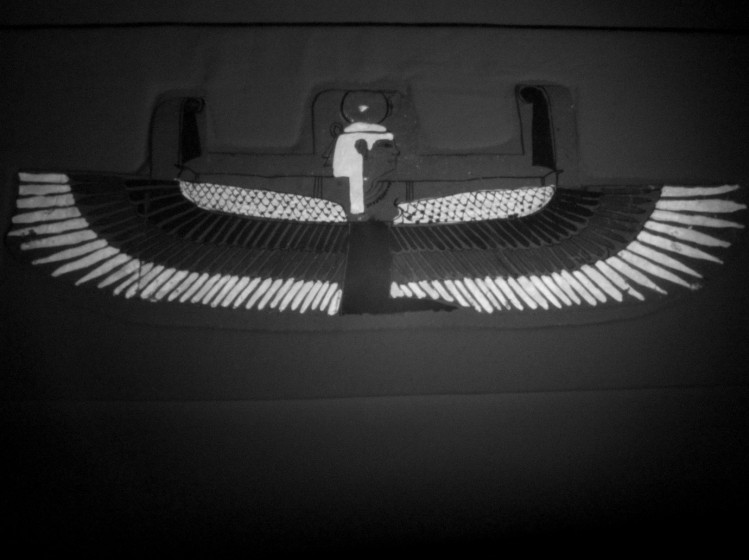 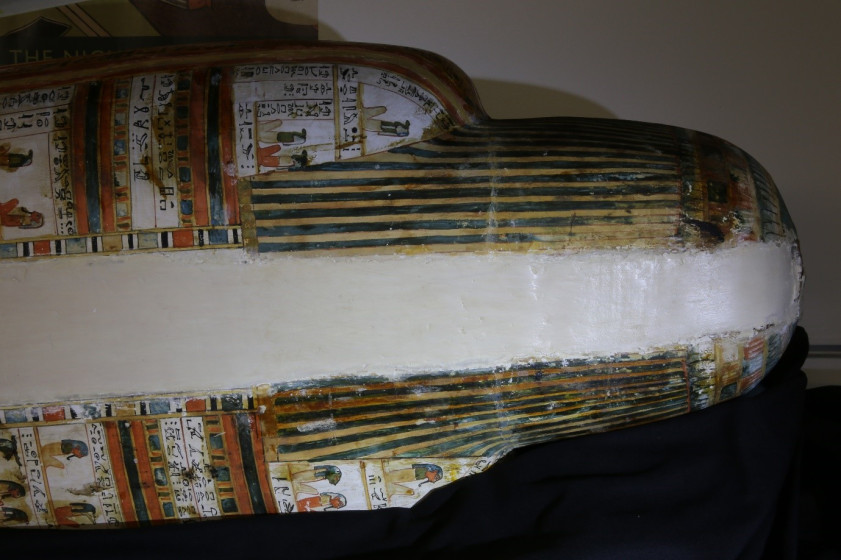 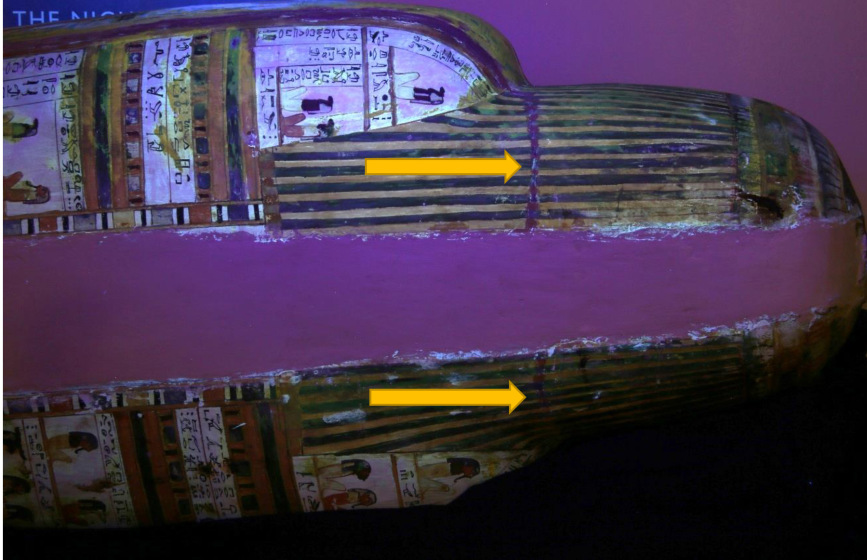 Image 7: Modern retouches of paint visible under UV light on the horizontal cuts on the rear of Nakhetfmut's head. 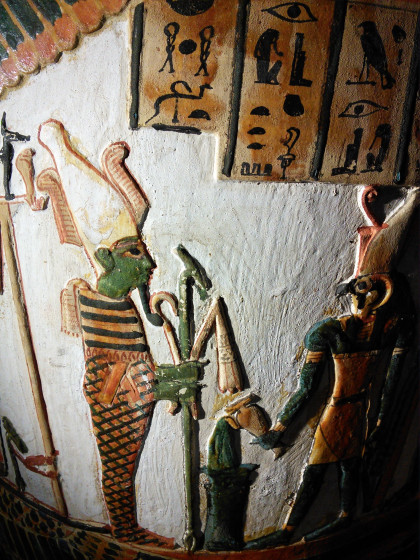 Image 8: Detail showing the original colours on the figures decorating the coffin of Nakhtefmut. 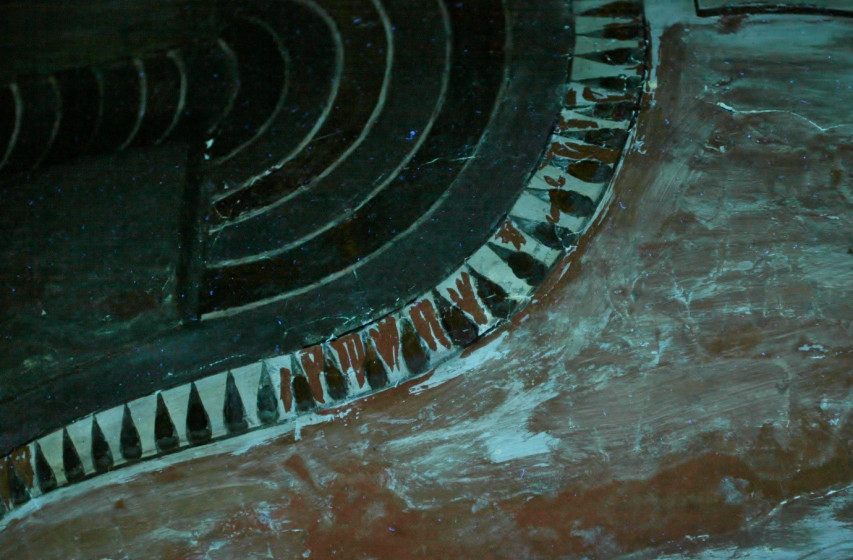 Image 9: Detail of Userhet's coffin under UV light. The repainted areas appear red even though they appear white under normal light.
Previous Next