Death on the Nile: object conservation

My name is Deb Magnoler and I started as a Conservator at the Fitzwilliam Museum on 4 January, where my work at the moment is in preparation for the Death on the Nile: Uncovering the afterlife of ancient Egypt exhibition, opening on 23 February.

I am a conservator of objects in museums and archaeology. After I graduated from Cardiff University in 2010, I worked as one of the Anglo-Saxon Staffordshire Hoard conservators at Birmingham Museum and Art Gallery. From 2014 until my recent start at the Fitzwilliam Museum, I worked mainly as a freelance conservator and was involved with the Newman Brothers Coffin Works museum in Birmingham, which was awarded an ICON (UK Institute for Conservation) Award for Conservation in the Community in 2015.

The Death on the Nile exhibition will offer an insight into the technology and construction of ancient Egyptian funerary objects, giving you a chance to see coffins in more detail than usual. This is a wonderful opportunity to learn what was discovered during research and study at the Fitzwilliam Museum and to take a closer look at the amazing craftsmanship that created so many impressive objects.

Once the exhibition starts, I will be working in an especially set up studio in the gallery so that members of the public will have the opportunity to observe conservation as it happens, but also to ask me questions about the objects and what I am doing.

Since I started in January I’ve already had the pleasure to work on the coffin of Userhet. The coffin will be on display during the exhibition; it dates back to the late XII Dynasty (c. 1855-1790 BC) and was found in one of the tombs on the east bank of the Nile and south of Cairo, in a site called Beni Hasan. The inscription on the front identifies Userhet as a “warrior” associated with the god Osiris.

The pigments used on the face and wig (image 1) are consistent with those typically used in ancient Egypt; the white body is covered by a thick layer of calcium carbonate based paste (image 2) and it is meant to resemble the white linen wrappings enveloping the mummy.

This is an early example of an anthropoid (human-shaped) coffin and each of its sides are hollowed out from a single piece of sycomore fig tree (Ficus sycomorus, a type of fig, not to be confused with the widely known sycamore species). It was originally contained within an outer rectangular coffin, where it lay on its side so that the eyes approximately lined up with the eyes painted on the outer coffin.

Image 2 shows large patches of discolouration on the left of the coffin lid, suffered while it lay on its side. There is a possibility that these were left by the fluids seeping out of the decaying body.

The interior surface shows a variety of tool marks (image 3) and fascinating ancient repairs and details that give a real human dimension to the construction of this object; strips of rawhide or sinew used to repair a large crack in the wood can be seen on the inner side. Casting light on features such as these will be at the centre of the exhibition, with visitors able to see the interior of some of the coffins as they have never been seen before. Additionally the exhibition will include ancient tools of the trade, as well as replicas and videos showing the creation of coffins and their decorations.

The coffin of Userhet was heavily restored during the 20th century, with gaps or breaks in the calcite layer covered by modern plaster, with the extensive use of unsympathetic adhesives to consolidate damaged areas and overpainting. Observing the surface under a UV light (image 4) revealed repairs and overpainting, which show as dark areas, often with visible brushstrokes.

Since it is to be moved for display in the exhibition, the coffin needed a fresh condition check. It had been previously conserved in 2005, when some of the old overpainting was removed to expose the original surface. Areas of surplus adhesive were also partly removed, avoiding destabilising any loose parts.

My work on the coffin included the localised consolidation of small fragments of calcite paste around the edges, which were at risk of shedding during the move from the conservation lab to the exhibition gallery. I also toned down some of the patches of modern plaster repairs, which appeared distractingly white against the rest of the surface. I removed dust and debris from the inner side using a special museum vacuum cleaner; this had the effect of bringing out the original colour of the wood and making the tool marks more visible. The conservation materials we choose today are reversible and their application is carefully restricted to the areas of unstable damage. The consolidant I chose has the sufficient fluidity and strength, but also and importantly, it does not alter the appearance of the original object by making it dark or glossy. It was applied using a very small brush, allowing the liquid to be drawn into the cracks by capillary action.

Usheret, whose good looks have not gone unnoticed among members of the staff, is now ready to join the rest of the amazing objects in the newly fitted exhibition galleries.

I look forward to seeing you there!} 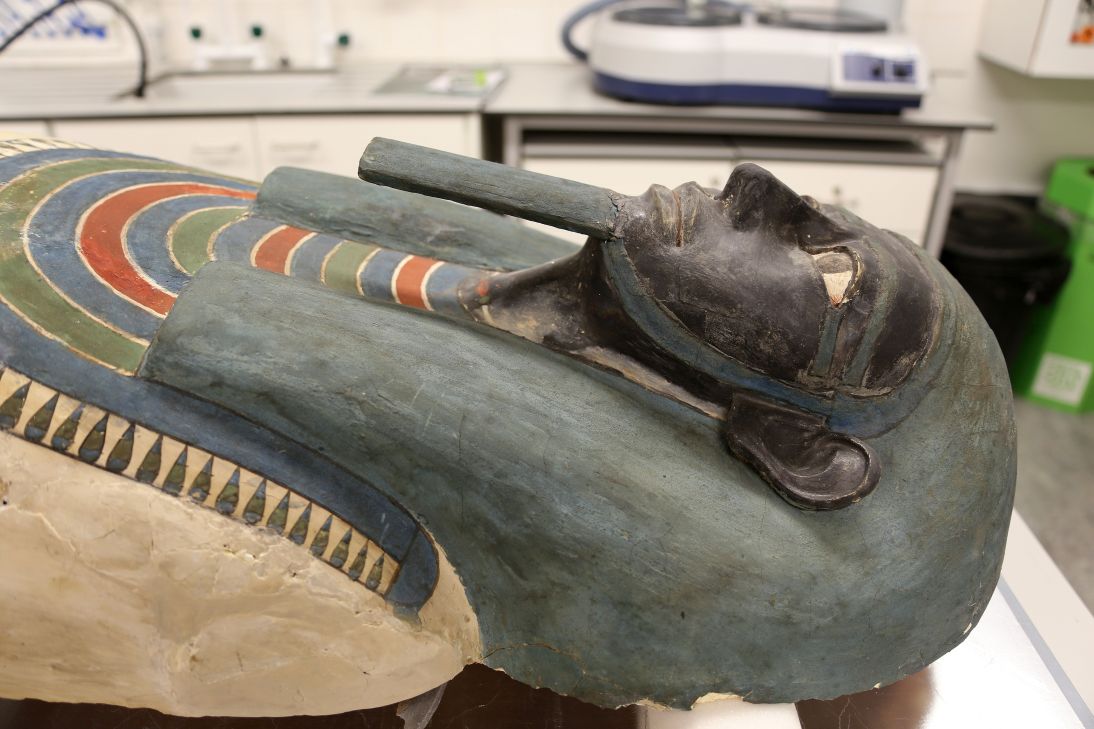 Image 2: Front of lid showing the inscription of Userhet, and discolouration on the left of the torso where the coffin lay on its side. 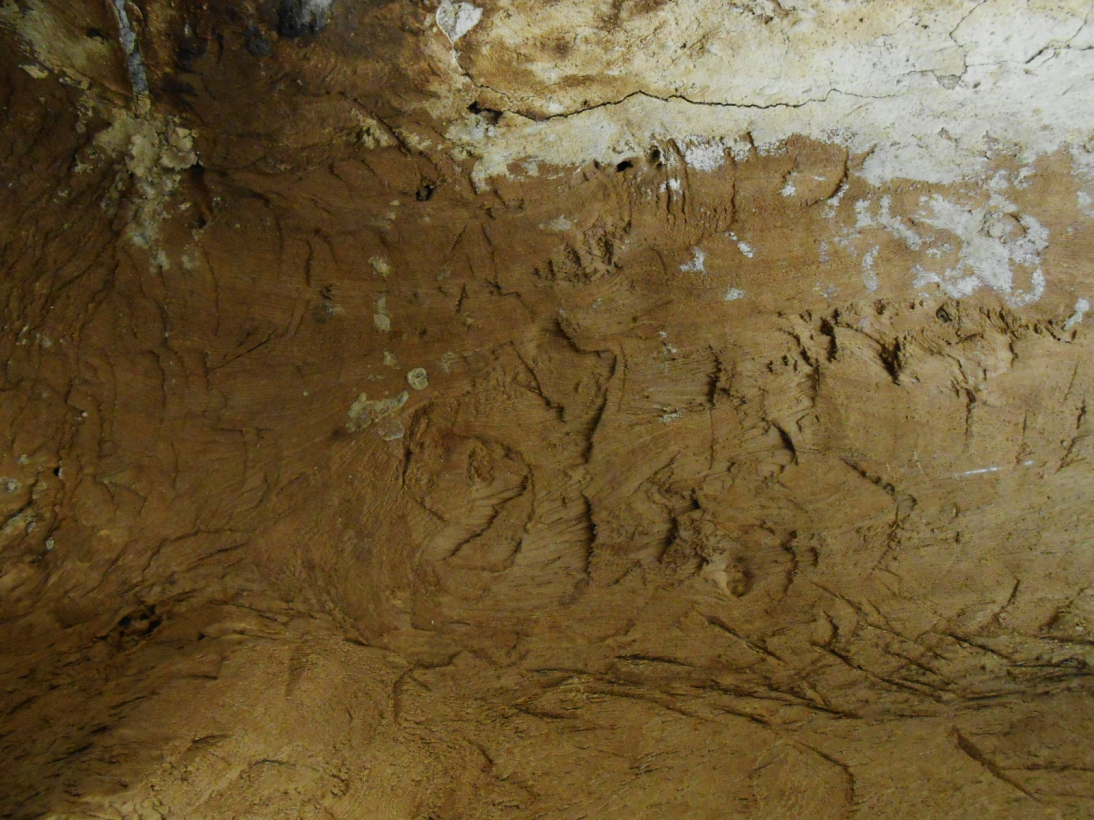 Image 3: Tool marks on the inside of the coffin. 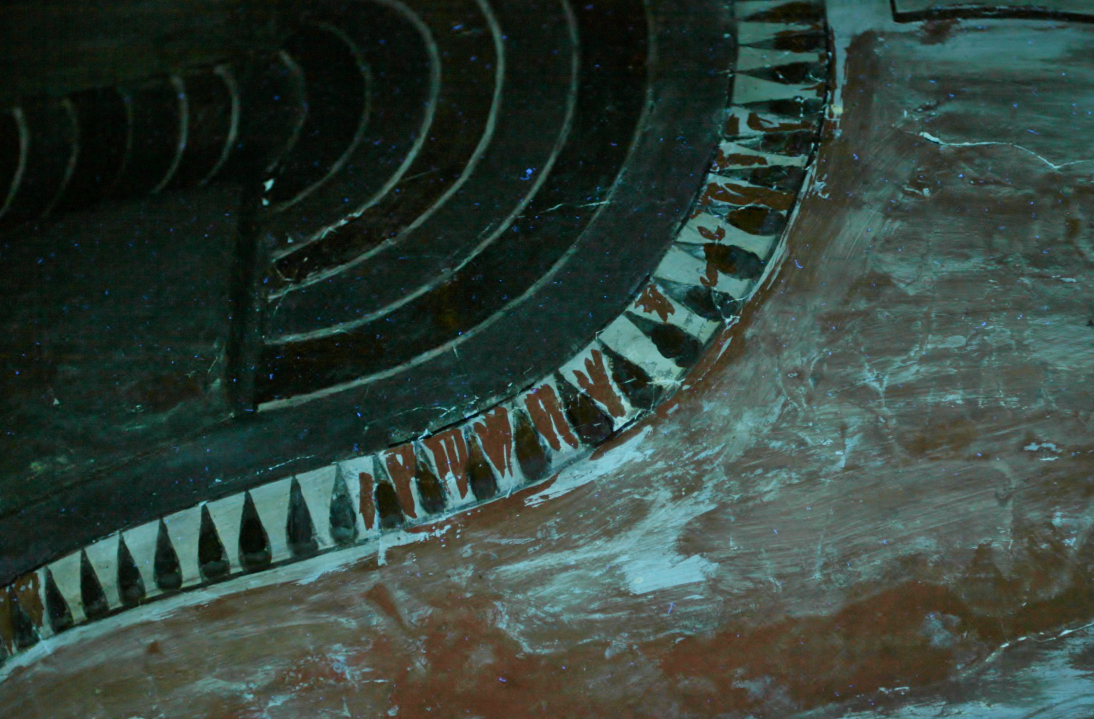 Image 4: Userhet's coffin under UV light as at 2005 showing a large area of overpainting on the right side of the torso. 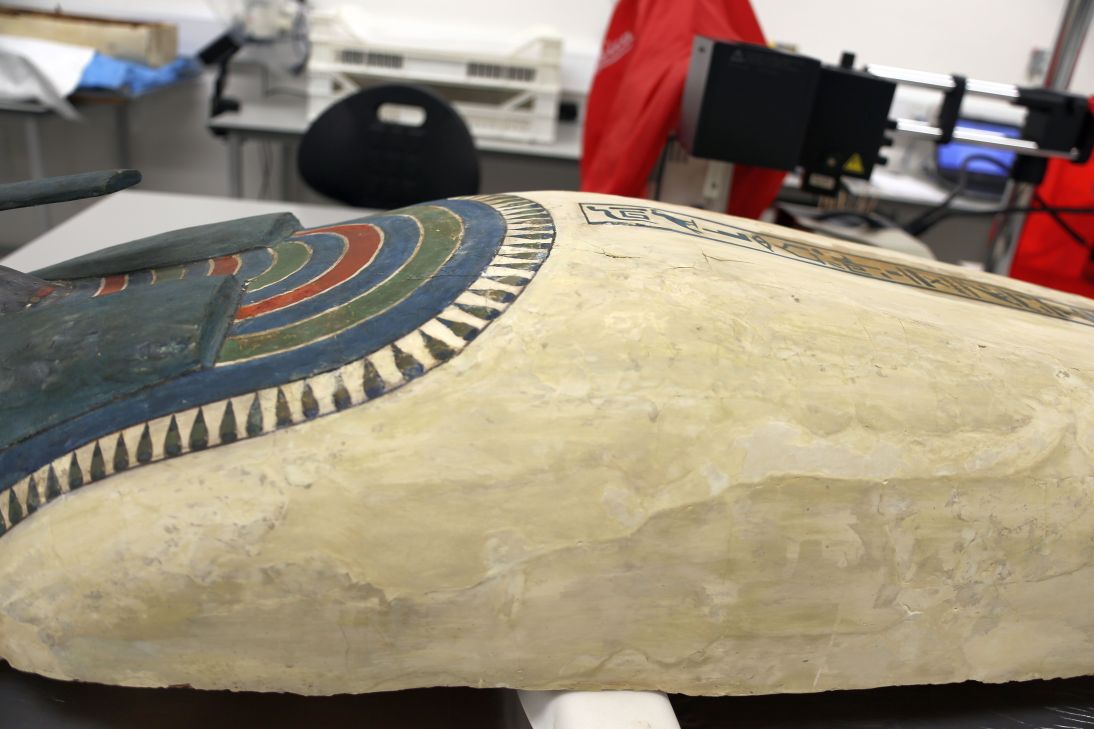 Image 5: Userhet's underwent extensive repairs in the 20th century, but these are not always immediately identifiable with the naked eye. 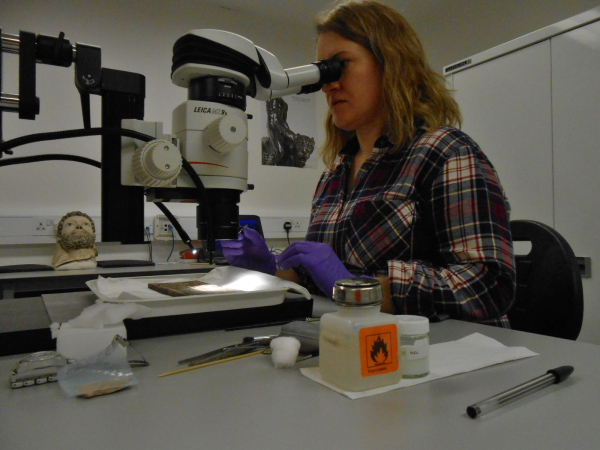 Deb Magnoler in the Fitzwilliam Antiquities conservation lab.
Previous Next