The mummy case of Nakhtefmut is constructed of cartonnage, with a gilded face and brightly decoration on a white plaster-like coating. It was found in excavations by Quibell at the Ramesseum in 1896.

Nakhtefmut’s burial was found in an undisturbed by J.E. Quibell. The mummy case, with the body of Nakhtefmut inside, was found inside three wooden coffins whose fate is not known. The latter were probably rather plain.

Quibell describes their discovery as follows:

“On the outer coffin of this personage, above the chest, stood a jackal in wood. Inside this was a second coffin, upon which lay a hawk in painted wood. This second coffin had an inscription painted down the centre. Inside this was yet an innermost coffin, covered with wreaths made of the leaves of mimusops. Two ropes lay along the sides, and the wreaths were joined to them like the rungs of a ladder”
(Quibell, The Ramesseum, pp 10-11.)

Objects found with Nakhtefmut bear the name of King Osorkon I (925–890 BC), and dated linen from his mummy indicates that he was buried after year 33 of that king’s reign, about 892 BC.

The mummy case is decorated with bands of text and scenes showing winged deities, the Sons of Horus, Osiris and other gods. There is a hieroglyph on each shoulder reading ‘east’ and ‘west’, indicating the intended orientation of Nakhtefmut’s mummy. The text running down the front of the case records that Nakhtefmut was the ‘opener of the two gates of heaven in Karnak’. His father, grandfather and great-grandfather held the same title, while his great-great-grandfather had been a priest in the same temple.

The text painted on the back is part of the so-called Negative Confession, a list of bad deeds that the dead claimed not to have done during their lifetimes, which was included the Book of the Dead and which enabled the dead to be judged positively in the Hall of Judgement.

How the mummy case was made and decorated

The mummy case is a moulded, hollow shell with a slit up the back. After the mummy was inserted, the slit was laced together and a board inserted under the feet. The exterior of the cartonnage is covered with a thick layer of calcium-based paste.

On the wig and the front of the cartonnage, intricate relief decoration was carved into the paste and fine details added with a pointed tool. Some of the decorative elements may have also been built up in paste, creating softer shapes.

Nakhtefmut’s beard is made of wood with a tang at the top, which was inserted into the cartonnage chin. The eye outlines, eyebrows, beard strap and beard decoration are blue glass, embedded in a paste made of Egyptian blue pigment and gum. A thin circle of dark material indicates the pupil on each white glass eye.

The surface decoration was drawn in black and red then painted with copper-based green, Egyptian blue, red earth, orpiment, yellow earth and carbon-based black. The red and blue pigments have been applied in different thicknesses to achieve variations in tonality. Red and black were also used for outlining the block colours before the selective application of pistacia varnish.

A bright white paint (huntite) was applied over the background of the modelled areas after the rest of the paint and varnish had been applied, giving a dramatic contrast to the decorative scheme. In some places there appears to have been some disagreement between the carver and the painter. The face and other details were gilded after the coffin was painted. 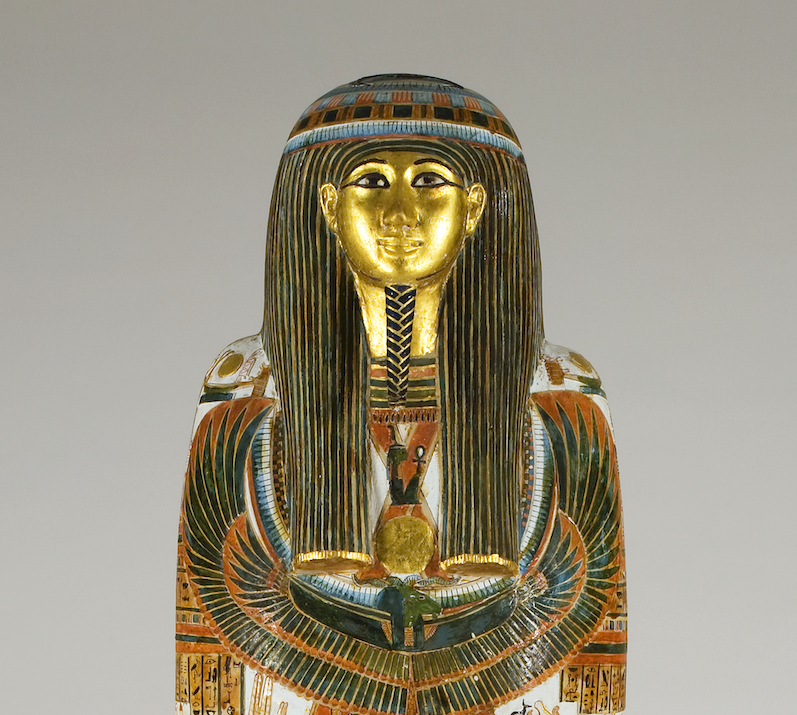 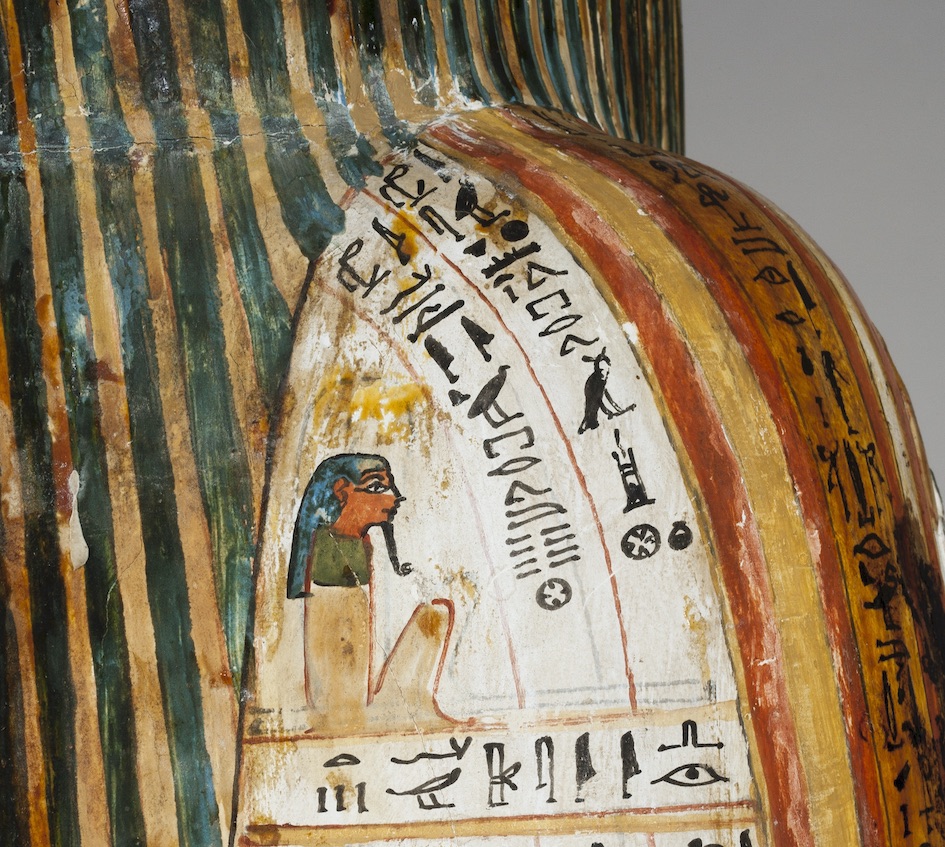 Detail of text on the back of the mummy case. Traces of the original black drawing are visible under the final painted decoration, including the position of the vertical text dividers and the positioning of the seated figure of a god. 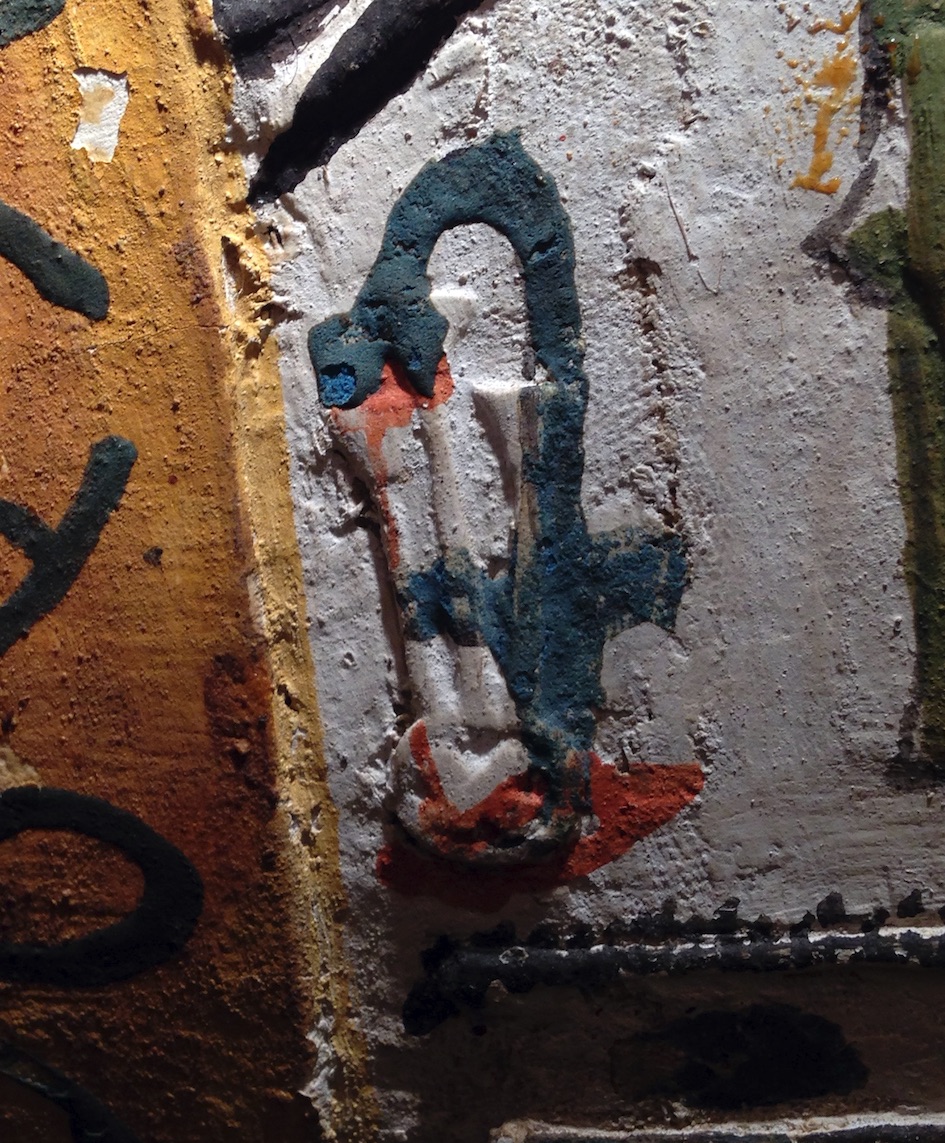 Detail of relief decoration on the mummy case taken under a raking light. We can see that the ‘northern Egypt’ hieroglyph is carved into the plaster here, but the artist who painted the inscription chose to place the hieroglyph for ‘southern Egypt’ over it. 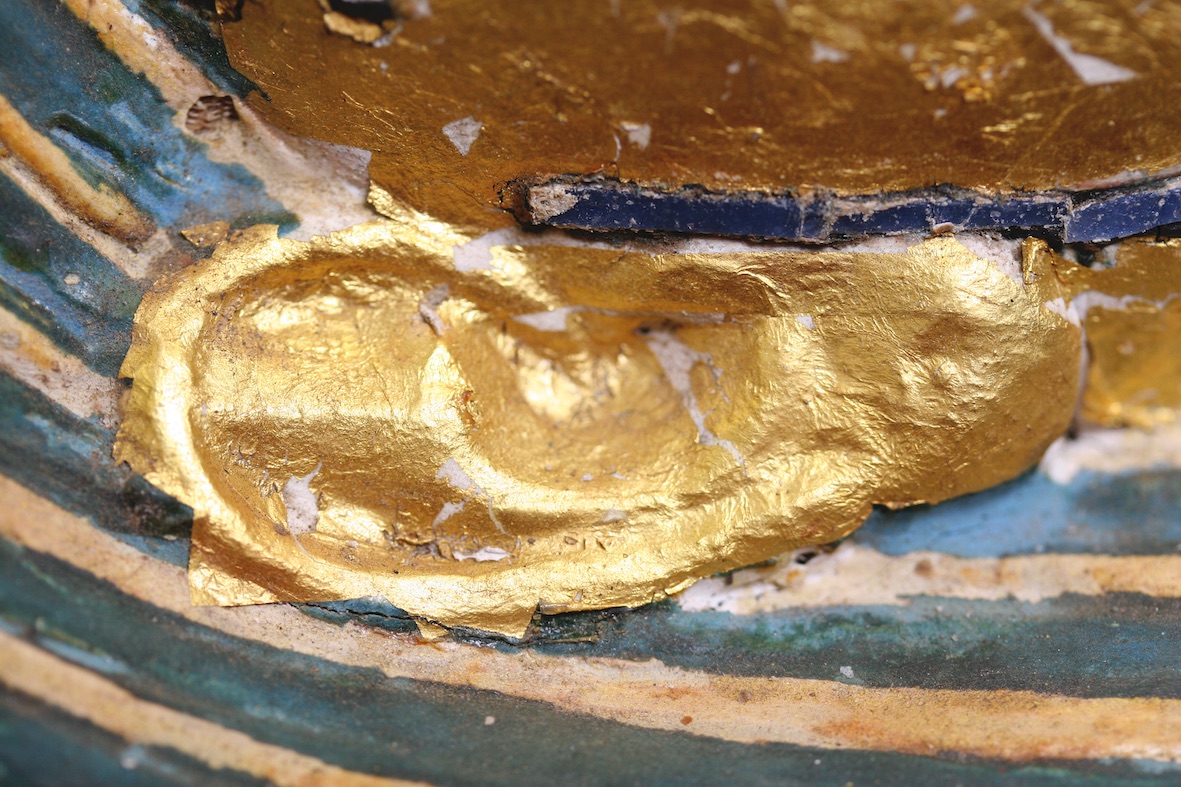 Detail of Nakhtefmut's gilded ear, showing the cut edges of the gold leaf squares that overlie the painted blue stripes of the wig